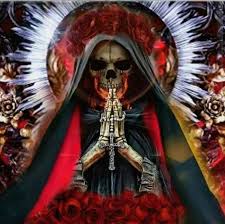 José Luis  Araya is 48 years old, tall, skinny  and  simply man tired from own existence. It seems that  his real purpose is  more to fool the death than to  feel the life. José Luis comes from the poor, broken family. His parents were alcoholic and drug-addicted people  and have been killed because of the debts they had towards one local criminal gang in Mexico City. Young Araya couldn’t have another choice but to feed himself on the toxic milk of city crime. It didn’t take long and he managed to lead the elite prostitution club in  the  Tepito, neighbourhood of illegal activities, low social classes and endangered human security. Everyone wanted to be good with  José Luis because he provided the best women and men for the sexual pleasures of hidden class. The luxurious  mansion he bought after 5 years of successful business would never confess about he nature of his contribution to the Mexican crime. But, the silent observer would notice the numerous  figures of the Saint Death all over on the windows of the house  and even on the gate. The Lady of Holy Death is everywhere because  José Luis worships her and believes in her as many of Mexicans.

In last 10 years, the whole world is starting being obsessed with Bony Lady but the official Roman Catholic Church has condemned devotion to this saint in 2013. In other words, Vatican does not recognize the skeletal female figure and according to Church, She represents the dark side, narco-satanic spirituality and values totally opposite to the Christianity.  Who is really the dangerous female saint?Chesnut is the Bishop Walter F. Sullivan Chair in Catholic Studies at Virginia Commonwealth University and author of “Devoted to Death: Santa Muerte, the Skeleton Saint,” and he claims that Santa Muerte has been unknown to 99% of Mexicans before 2001 and then she went public and becomes a trend among devotees who found themselves cut off from the main society. Now, it is about 10-12 million people who cherish her, mostly in Mexico but her role is growing fast in the United States and Central America:”Although she has recently exploded in popularity, Santa Muerte has been referenced in Mexican culture since Spanish colonial times, when Catholic colonizers, looking to evangelize the native people of Mexico, brought over female Grim Reaper figures as a representation of death.But the Mayan and Aztec cultures already had death deities, and so the female skeletal figure became adopted into the culture as a kind of hybrid death saint.She’s also mentioned twice in the historical records of the Inquisition, when Spanish Catholic inquisitors found and destroyed a shrine to Santa Muerte in Central Mexico. After that, Santa Muerte disappeared from historical records for more than a century, only to resurface, in a relatively minor way, in the 1940s.She then faded into obscurity for a few more decades, until the drug wars brought her roaring back.”

After the age of Catholic purity, the rise of crime and human  insecurity has made the perfect setting for the influence of Santa Muerte, also known as non-judgmental saint. People are aware that they can not ask God to help them about the  bad things they will do because they know they will go to hell and pay for their sins. Lady of Death is there not to judge but to accept human sapiens  in the worst performance ever.She is worshipped by those who kill because she will protect their lives. She is cherished by those who dance on the other side of the law because she will keep them enough far away from the touch of justice. The Holy Death was the perfect saint for the imperfect Mexican universe of ruined faith, death, blood, tears and fear from the dangerous future. This is a folk saint, comforting demon that doesnt leave you alone even if you pay all debts to those who chase over you.

The reason for mega success of the Virgin of Darkness is not the boredom of the people but the lack of contribution of the legal Church in the lives of many. The bishops preach about the moral but they rape young boys. The highest officials try to convince us that we need to be ethic but they forgot the meaning of it. It is a decadence of everything so the Santa Muerte comes as something that really symbolizes our times and our naked, cruel nature, all what we are and not what we should try to reach. Jesus has promised the eternal life but the Church has betrayed its folk. The Holy Death is a demon that lurks on our weakness and plays with our instable personality and demolished world we live in.

The death in Mexico is more natural as life. Why?Death is everywhere and everyone learns to live with death. That is why Lady of Death has a chance to be so popular and so adored in public. If you please the queen of death, maybe you will have a life. It is an oxymoron, it is a parody of daily religion, it is a life in the mirrors. 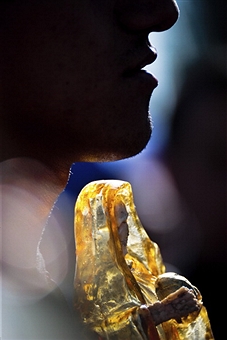 The Drug wars in Mexico are killing so many people that police records can not update. It is a locomotive of horror that is happening every day with no break. No risk, no fun. Mexicans have learned how to survive between possible death and eventual life. In the land of organ harvesting, multiplied viruses of prostitution and weapons and drug trafficking, Santa Muerte seems like a fallen angel that is involved in domestic tragedy.

The glorious birth of the Santa Muerte is also connected with the age of crisis and absence of soul peace. The appetite for darkness comes when the light is not enough strong. The associated problem is the ritual of sacrifice that has been followed the story about the Lady of Death. Many local Mexican gangs that worship the Santa Muerte have tried to sign the contract with the blood of innocent. That explains the missing orphans from the streets of Mexico City and disappeared  homeless, forever given on the altar of evil.

This cult is very popular in the United States because of the Mexican and Central American migrants. They came for American dream but they have brought the old nightmare. The monotony of American religious market allows any kind of experiments with Gods and Devils so Santa Muerte has been accepted as queen of underground world.

We can not criticize the people for their flaws but the society for breeding the conditions for hell on the earth. Each cult or religion is just answer on the cries of the souls.Instead of encouraging the old or new saints, we must encourage the rise of the common sense that is not common anymore. The renaissance of the civilization is the only thing we need to worship because it is the only thing that could be accurate.

3 thoughts on “SANTA MUERTE: THE VIRGIN OF HOLY DEATH”

THE WATER ELEMENT: WHAT IF IT IS GONE?