“People speak sometimes about the “bestial” cruelty of man, but that is terribly unjust and offensive to beasts, no animal could ever be so cruel as a man, so artfully, so artistically cruel.”
―  Fyodor Dostoyevsky

The compassion for animals has been always considered as an important element of healthy personality. There are some psychological statements that people who do not feel empathy with another living creatures are potential psychopaths who will develop killing instincts as time passes. The child who tortures pet is under risk to be formed into person with mental issues of higher level. The sadistic kind of behavior towards animals is one certain sign of distorted soul and if it has collective manner, then the whole society shares the negative values and serious mental disorders.

There are many customs all over the world which simply requires to be interpreted and analyzed. Some of them are totally opposite to the advanced world we live in and to our 21st century and its challenges. Some of them are accepted but still aren’t fully understood. The diversity of traditions and cultures is something we must deal with but where are the boundaries of tolerance for definitely intolerant things?Who will set up those lines and who will cross the line with the excuse that ” all is just a matter of culture, religion, tradition or simply community”?

China. One name for  one very economical successful   country which is based on history of one big civilization. The dynamic of development of Chinese economics as well as  the societies is simply riddle for western financial and social  thinkers. There is no doubt that China presents the locomotive of Asian progress and that people over there work hard to redesign the Chinese dragon of success. However, the questions about symbiosis between old habits and new demands, remain the threaten to the global image of China. 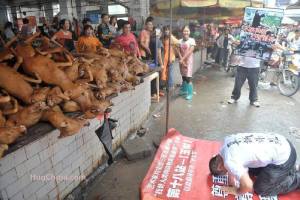 Have you ever heard for Yulin Dog Meat Festival in China?It is an annual celebration which is happening in Yulin, Guangxi, China, when the summer solstice is started and that festival is gathering all of those who enjoy in dog meat eating. That is enough shocking for ll of us who love and keep dogs as our pets but it is also a terrible period of time for many Chinese who are trying to protect their own pets from stealing and ending in some food on the festival. This dark tradition is very old but it is implemented officially in 1990s. The reasons for this festival are weird from our point of view but Chinese people have another explanations:“According to Chinese lore, eating dog meat stimulates internal heat, making it a food that wards off winters’ cold. But on this inaugural day of summer, it’s a superstition  that’s driving dog consumption: the meat is believed to bring good luck and health. At the festival, hotpots are fired up, lychees peeled and liquors poured. Animal activists estimate over 10,000 dogs are killed for the festival, according to China Daily, the government’s English-language mouthpiece.” 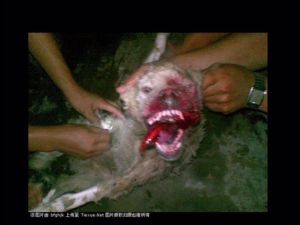 According to Time, China has no Animal Protection Law but the draft was proposed in 2009 with the purpose to punish animal abusers with 6.000 yuan(over 900$) and for organizations which deal with dog or cat meat to go to the amount to 500.000 yuan($80.000). Unfortunately to date, the National People’s Congress has not signed the law and has not given any signals it will go in this way. Some animal rights activists claims that Festival is illegal based on some another Regulation, issued by Ministry of Agriculture in 2013 about the laboratory quarantine measures . Dogs are mostly taken or stolen and transported in non-human and cruel conditions, without any hygienically followed rules. It doesn’t surprise the fact that many of them are not sanitary controlled and thus incidents with transferred human rabies  in this Chinese city are expected. 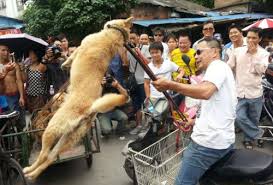 There are so many people who have dogs as their pets in China and they are among those who are standing up against this barbaric tradition. The rise of social media and the activism of Chinese  celebrities who call for boycott of such a custom, made a Yulin being an international problem and target of all animal lovers worldwide. This is not anymore just a Chinese shame but the world shame, failure of humanity to turn back to dogs, to our best friends.

Marc Ching is one of people who didnt want to stay strong only on words but he practically stepped in and started to help to the army of endangered Chinese dogs, in the name of the Animal Hope and his Compassion Project. His words about the Yulin Festival are the following:“I never watched anything like that in my entire  life.Never thought humanity and human beings could behave the way in which they do. It is devastating.It is soul betraying. It is God shattering and Earth desecrating. The way their blood eats you from the inside. The way the darkness, cuts that space out of your mouth. In all honesty- I am still not well. I have never been this dark in my entire life. Never been in a place, where who I am I cannot understand. But I am trying. Each day I look into the sky, and use hands to pull stars that draw lines on my face. ” Marc’s mission is this time political, after he spent days and nights sacrificing all to help poor animals. He is gathering people with common sense and feeling against Yulin to come there and oppose this shameful event by words and flesh. By everything who they are and what they have. That is, as he says, his Final Cry.

The whole world is united about stopping this embarrassing tradition. It is nothing about tradition, it is all about backward community which claims to enjoy in this kind of happenings. First of all, thousands of dogs are tortured, slaughtered and finally killed for meat which is not supposed to be consumed, especially not in the way it is organized to be. Second, in the age of high awareness of animal rights and animal cruelty, this festival is a slap in the face of so called advanced civilization.

How we can pretend we share values of humanity when we would rather close eyes in the front of Chinese dog butchery ? This is not something which will be stopped just like that as it started, suddenly. China financial influence gets stronger and the issue of corruption shouldn’t be questioned. In other words, who have money:can slaughter everyone and everything but who hasn’t: will be addressed for breaking the rules of the dust in the wind.

John Grogan once said:“Animals lovers are a special breed of humans, generous of spirit, full of empathy, perhaps a little prone to sentimentality, and with hearts as big as a cloudless sky.” I believe that we can change the cruel dark reality for our little and voiceless friends. We are the only what they have, their only hope. For many of them  is already late but maybe for some of them is right time to act and to save them from the hell of civilization.

To be the part of global movement against the savagery all you have to do is to sign the petition and alarm others to do the same :

They are waiting. It will be new sun for them or the last and final cry of lost trust in humans. 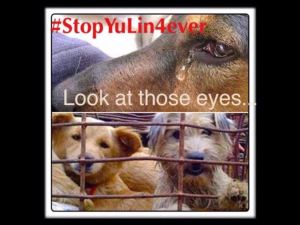 10 thoughts on “THE YULIN DOG MEAT FESTIVAL IN CHINA:WEIRD TRADITION OR PURE SAVAGERY?”

THE CONCEPT OF BID'AH IN ISLAM:WHEN RELIGION IS HIJACKED BY INNOVATION

THE SECRET WEAPON OF NATURE IN IRAQ:CAMEL SPIDERS - WIND SCORPIONS