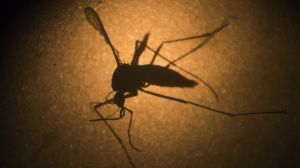 DOES NATURE KEEP US SAFE OR NO?

There are so many mosquito -transmitted viruses and so many diseases which are caused by them. The big majority of viruses were born in Africa and are located in that rich biodiversity complex. Only some of them, as a result of rain forest destruction and massive immigration and fluctuations of people and goods, end up in some happy western country and turn it into the place full of  panic, fear and blood.

The stories about deadliest viruses from misty African forests were sold the novels for years but our reality is not so far away from the nigh mare scenario what has been offered by some prestige authors. They earned their place on the NYC best-selling books list while they were trying to convince us that viruses could knock on the doors of our homes. I am referring here to the amazing book ” The Hot Zone”, written by even more amazing  american investigative journalist , Mr. Richard Preston. When his book about Ebola virus was published, based on his investigative work and pure evidences, collected in years, the whole world was sure that the  Armageddon is started in silence.  However, the mentioned author always states that the purpose of his writing is to warn people to respect the nature more than they value money. I liked his observation  about the contagious tropic viruses from Africa.They are hidden in the shadows of the glorious wildness but when the greedy civilization start digging and eliminating the pure beauty of the nature, the Earth defends itself through the army of viruses which are sent to stop the mankind to keep destroying the whole planet. That was the destiny of almost all deadliest viruses around  the wold: they came from nowhere and stayed forever: the  HIV virus,the Hantavirus,  Ebola virus, Marburg virus,the Lassa virus, The Junin virus, the Crimea-Congo fever virus, the H5N1 virus, the Machupo virus, the Kyasanur Forest Virus, the Virus of Dengue fever…and many of them which are still unknown.

The Zika virus is one of them. It is for sure not the deadliest and do not belong the family of top 10 the most brutal viruses -killers but it is also not so naive and should be take  into the consideration of potential public health risks. This virus belong to the specific group of mosquito-transmitted viruses and share the importance with the Yellow fever, Dengue and West Nile virus. It is not a new microbe, it is known since 1950s and it got the name after the Zika Forest in Uganda, when was his first hot spot. This virus is not a lethal in the way we should be worried but it is a particularly dangerous to the certain population, like pregnant women and old people with weak immunity:“Symptoms include fever, rash, joint pains or conjunctivitis – red eyes. Many people might not realise they were infected and recover after two to seven days of being infected. However, there is growing evidence of a causal link between Zika virus infection in pregnancy and births of a congenital disorder called microcephaly, where the brain of the developing foetus fails to grow normally and babies are born seriously deformed. There is no vaccine or treatment for Zika virus.”The Zika virus was known in Central and South America, but his explosion in the North  American continent, as a result of massive travels and social circulations,was something which caught an attention of the American health officers and the CDC by itself.This is not type of disease which could open the final chapters of the end of the world with its mortality but it is a serious disease when we compare the statistic about the children what have been born by infected mothers and that they have had high deformations in and out. The CDC is warning domestic population, specially pregnant women, to not visit the areas endangered with the Zika virus, because they could be contaminated and their babies could be damaged. The doctors are still researching  the links between Zika virus influence on mother and furthermore on the  baby,and how babies were born with the extremely small heads will suffer lifelong for this deformity. Margaret Chan, the WHO director general says:“The level of alarm is extremely high. Arrival of the virus in some cases has been associated with a steep increase in the birth of babies with abnormally small heads.A causal relationship between Zika virus and birth malformations and neurological syndromes has not yet been established – this is an important point – but it is strongly suspected.The possible links have rapidly changed the risk profile of Zika from a mild threat to one of alarming proportions. The increased incidence of microcephaly is particularly alarming as it places a heartbreaking burden on families and communities”

Addressing the global health  threat, Lawrence Gostin, a public health law expert from Georgetown University, warned that Zika had an “explosive pandemic potential”.It is always late when the health authorities react, it is always not enough soon for those who suffer.The 23 american states are fighting a battle with this virus, and many south american too. European health bodies inform us that one case is noted in Denmark and five in Germany and that all others and potential patients are under monitoring.

The ability of Zika virus to cause the serious damage to the world is not so majestic. I would rather say that Zika virus has an ability to harm the most sensible part f our societies, our unborn children and to defect them for the future, without a chance that they get recovered.

The global public health is facing up with another mysterious soldier of nature. How we will react is up to civilization protocols,  but how the nature will react is always up to nature. The nature is, as we know, the  unpredictable.

PRETEND TO BE A KAFIR:SAVE MISSION FOR ALLAH