I KNOW THE SECRET OF COBALT 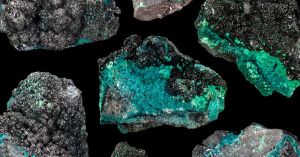 “Childhood should be carefree, playing in the sun; not living a nightmare in the darkness of the soul.”
― Dave Pelzer, A Child Called It

When you are in Africa, you are able to learn how people really live,  especially those who are hit by poverty, lack of basic conditions and something that we take as a standard.  It is devastating to see young children that run to you hoping to get a piece of chocolate, the taste of far away luxury. Their smiling faces do not show any sign of suffering but if you try digging a bit more, you come to the ocean of pain and lost childhoods in the worst nightmares of the humanity, born and raised on greed.

The  new and ecological movement in the world is trying to come out with better solutions for our environment and the ecosystem that is dying but sometimes, I am wondering, is there any common sense in some of the strategies they are offering. We all know how powerful is a campaing for stimulating people to buy electric cars, in spite of their price. The fact is that electric cars are so designed to cause less pollution  because they do have zero exhaust emission.  You have a chance to use renewable energy to recharge your EV, particularly if you recharge your battery from your existing solar PV system.  It is somehow all connected in the circle of good and friendly ecological habits. However, it must be something  distubing behind the glorious story about the electric cars but it is usually covered with money, profit lobby groups and interest on the global level.

I am somehow sure that not many people know that those vehicles aren’t really so perfect as they are presented to be. It is a fact that the do not emit the climate damaging greenhouse gases or nitrogen oxide. They are very easy to operate and cheap to be maintained.  It looks like that eco friendly cars do not have any known disadventages but, unfortunately, their dark sides do exist.  First of all, the production of one electric car is more demanding that the one that is working on the conventional car. The disposing of the batteries for EV could cause an environmental bomb. Generally, the whole development process,  that includes the use of cobalt,  opens the ethical questions and social issues, like the abuse  of children in illegal child labour in some of the African countries. One of them is The Democratic Republic of Congo, known to be a main supplier (it provides almost the half of the international needs for cobalt) due to the exploitation of the children in the mines around the country.

What does it mean? You just need to imagine the young African child that is working in mine, searching for cobalt, instead being in the school. This innocent child will be abused in illegal labour just to provide your batteries with necessary cobalt.  According to the writing of organisations for children rights, the situation in Congo in not anymore tolerable and the global community and the world has to do something about it:”While the majority of Congo’s cobalt comes from large mining sites where rock is dug up by trucks from the bottom of deep pits, a growing proportion is coming from an estimated 150,000 ‘artisanal‘ or informal miners who dig by hand in Kolwezi. The unregulated practice is increasingly drawing in children like Kongolo. And last year accounted for an estimated 30 per cent of Congo’s cobalt — the country mines more than 70 per cent of the global total — according to Gecamines, Congo’s state-owned miner.  Congo’s dominance presents a growing dilemma for carmakers and those in the supply chain as they look to meet a rapid increase in demand for electric vehicles and batteries. If they try to improve conditions on the ground they face a series of additional risks, from the threat of corruption to monitoring and enforcing measures to avoid deaths from informal mining and the presence of children on these sites. And while manufacturers cannot afford to ignore Congo they must also know that untraceable metal — from these informal miners — leaks into the global supply chain via refineries in China, ending up in batteries, cars and smartphones sold in the west.  Thanks in part to high cobalt prices in 2018, a lot of this activity now takes place within the sites of the large mining groups, including Switzerland-based Glencore and Hong Kong-listed China Molybdenum, which sprawl across large areas of border villages.In June 43 informal miners died when part of a pit collapsed at Glencore’s largest mine outside Kolwezi. State authorities sent the army to the site as well as China Moly’s giant copper and cobalt mine 90km east in Tenke Fungurume to remove up to 10,000 informal miners who were trespassing.” 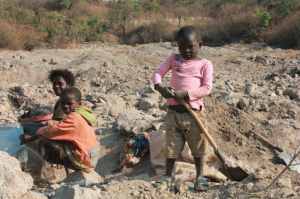 Those children are maybe 6 years old and they do not have appropriate and protective clothes, at the end of the days, here we are talking about kids that should play around and eat ice cream and not hurting themselves in mines, digging for a powerful cobalt, the new drug of the high tech West. The Amnesty International has informed that 1/5 of the cobalt that is derived  from Congo is produced based on the illegal child labour while the rest is official and through the industry produced.  Someone should simply go there and see the army of the young children that are exploited in the informal digging of the cobalt. The companies from the West claim to be interested in children rights but they don’t do much about really stopping it. It means less profit and who would be ever interested in less money ? They keep on sweet talking and empty promising but the painful reality for Congo kids is still there. They are bleeding and dying while we are trying to convince the whole world that we love all children. It is like in the Farm….all animals are equal but some do have more rights. In our case is that all children are or should be equal but some have more rights or some have no rights at all. They are forgotten in stock marching, dollar and euro racing, empowered by the human race with no hearts for others.

After The Report from 2016 about children lost in the cobalt mines in Congo, the governments are pushing the companies to make a ground research on the included labour before they make a contract. Nevertheless, I doubt it will be stopped because Congo is one of the poorest land in the world and easily corrupted.  DRC is wounded by so many civil wars and epidemic outbreaks.  People who live there are experiencing the hellish conditions and daily fight to survive. Many families are broken so the children are used to bring the money for food to their parents.  They are sent deep in the hell of cobalt mines, without any working protection or tool. Some of they die because of cobalt lung and some are being sexually abused and left on the road, like the dirty blankets.

Even the DRC bans the under-age children labour but nobody cares about it. There is no legal force behind the bush interest for survival.  The poverty in Congo is more contagious as deadly Ebola virus. As long as it is global demand for cobalt, the children of hell will be sent to burn in that hell. The car maker Tesla, the market leader of electric cars, has announced its business project to produce more than 500,000 EV per year, starting with 2018. Based on the research, it will need more than 7,800 tons of cobalt to reach its goal and this means thousand of new kids from Congo, without future.  I have even read that some companies cancels their contracts with the local mines if they are based on the industrial technology because of the price shock. The innocent army of kids is cheaper choice for the expensive businessmen from the rest of black-hearted world.

My soul is bleeding for those poor souls. I have been in Africa and the  honest smile and warm eyes of the African children is something that I will never forget. I am calling all mothers and fathers of our modern age, all brothers and sisters, all humans that are still out there, to stand up and to join to the new revolution against the secret enslavement in the society that we can’t escape. We are all slaves, why  then  we can’t understand when someone is even more slave as we are ?

STOP THE CHILD LABOUR. SAVE THE CHILDREN!

One thought on “THE KILLED CHILDHOOD: CONGO, CHILD LABOUR AND ELECTRIC CARS”

ALL RULES OF STRESS: BEING A MASTER OF STRESS AND NOT ITS SLAVE