THE WORLD´S  MOST IMPORTANT ECOSYSTEM IS DYING IN FIRE 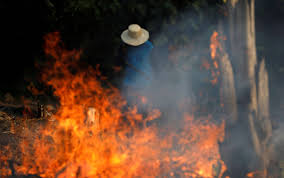 “If you think the economy is more important than the environment, try holding your breath while counting your money.”

In last few years, I have written a lot about the significant role of the rainforest ecosystems for the whole world. I warned about the malign effects of deforestation and about the rise of emerging infectious diseases because the microbes is the weapons that our poor and  weak Earth is using against us.  Back in 2016, I started following the story about the Munduruku Indians that are standing out and trying to fight back the corporative efforts of Brazilian governments to turn the beautiful lands of indigenous people into the economic beneficial area. Now, even 3 years later, the crisis is real and obvious for everyone, everywhere. The Amazon rainforest is burning and nobody does anything to stop it. We are witnessing the terminal metastasis  of cancer in the lungs of  Mother Nature and we arent able even to comfort it. 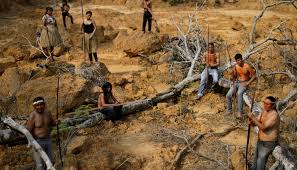 The greatest tropical rainforest system in the world is under flame and it seems that tragedy turns into the scary movie. The fire has no mercy so the people too. This is not the first wildfire in this year because since January, according to Brazil’s National Institute for Space Research, has reported 72,843 fires in the country, especially in Amazon region. This further means, every day is a new inferno for our beautiful Amazon tropical forest. This summer is actually the beginning of our end due to the unstoppable aggression of the wildfire, that is eating the heart of Brazilian magical jungles. CNN meteorologist Haley Brink believes that this time, all limits are crossed:“Farmers and cattle ranchers have long used fire to clear land and make it ready for use, so they are likely behind the unusually large number fires burning in the Amazon today. This year’s fires fit with an established seasonal agricultural patternIt’s the best time to burn because the vegetation is dry. (Farmers) wait for the dry season and they start burning and clearing the areas so that their cattle can graze. And that’s what we’re suspecting is going on down there.”

The opinion that this range of wildlife is not natural bur rather caused by humans is supported by the statement of Alberto Setzer, a senior scientist at INPE. He believes that the vast majority of these fires is a result of human actions, on purpose or by accident. Even in dry season, the rainforest cannot so easy catch the fire flame, the process is helped by some others levels and interest group. In this case, we are talking about people who want their agricultural ambitions to be realized. Their greed and evil spirit is moving the fire forward, against the Amazon, against the common sense of the civilisation and against the future of this Planet.

Imagine the 5.5 million square kilometres, almost bigger area than EU, with almost 3 million plant and animal species and home of 1 million native people. This area is known to produce 20% of the Earth´s oxygen due to the fact that rain forests contain 90 to 140 billion metric tons of carbon.  Imagine this universe of nature wonders and tropical diversity to be lost in flame, because of our egoism and our greed. The wonderful Amazon River with all its tributaries has 20% of the world’s flowing freshwater  and Amazon ecosystem itself has a third of all known plant, animal and insect sorts.

Just a though about the empty world without tropical forest is not only about the lost beauty of Nature but about the lost battle with climate changes. The plants reduce the level of pollution because they remove CO2 from the atmosphere and use it for their own process of photosynthesis. At the end of this phase, we get oxygen back in the air and carbon that makes plant grow. The tropical rain forests are decreasing the terrible effects of greenhouse and they slow  the development of climate changes.

On the other side, if they accept deforestation only with an intention to earn more money due to their industrial aspirations, they will face also with a risk of new epidemic crisis. Don’t you think that is a good revenge of the Nature? I do believe that expansion of germs  will be a new plague for this civilisation with no soul. The most intimate corners of the Earth are attacked and the it is just a matter of time when the new and apocalyptic virus, even more dangerous as Ebola, will rip off the lives of human being. We are walking on the edge and Brazil is not the only country that plays with the tolerance of the Earth. There are many all over the globe that are dong the same, if not the worse. They all want more place for their business projects and they let nature less place and time for recovery.

The plastic and real example of irresponsible ecological policy is a current Brazilian president, Jair Messias Bolsonaro, who was elected in October 2018,  because of his campaign promises to rebuild the economy by exploring the Amazon´s economic power.  It was not a political joke but his serious idea to abuse the tropical forest for his own lucrative political gains.  He cut the budget of all environmental organisations and encouraged local farmers and ranchers to get it what they need, in spite of lack of environmental sustainability. Now he is under the global pressure because the world is concerned about the future of Amazon and majority of people are aware what does it mean. I must add that the saga about Amazon fire hasn’t been so followed on the international level as it was The Notre Dame fire. It is ironic but people have been more worried about burning of altar than about the burning of the nature, the killing of future.

At the beginning of Amazon crisis, Bolsonaro didn’t want to cooperate and pretended to have things under control. Suddenly, after he was warned that there will be consequences for his political behaviour, though the reasonable  speech of French government, with the support of other European countries, Bolsonaro informed that he will send the army to fight the fire. Indeed, Brazilian government wont risk to loose Trade Agreement with EU, even if Bolsonaro can’t stand French president Emmanuel Macron.  The anger is all over the Planet and people share the news and photos on social media. Some of them use the real sources but many play with fake. It is not correct to mislead the public but if that is the only way to alarm the global common sense, then I will understand. The people who kill our Planet have their names and addresses, as one smart man said, once upon a time. They will see destroying this world, no matter what we do but we must keep fighting, incoming, spreading the awareness and supporting the authorities and individuals who stand up for nature, environment and wildlife. 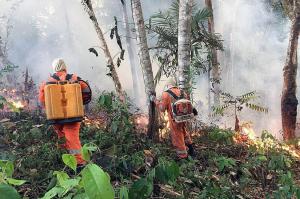 The fire of Amazon eats up everything but it could be and it must be stopped. It could be defeated and it will be. However, the most dangerous fire is human greed. The tiny flame remains always, somewhere…in someone.

SAVE AMAZON RAINFOREST BEFORE IT IS TOO LATE!

4 thoughts on “THE LAST SCREAM OF THE RAINFOREST: AMAZON IN FLAME”

THE ZUCCHINIS: BETWEEN FRUITS AND VEGETABLES

COLORADO: THE LAND OF RED RIVER, ROCKY MOUNTAINS AND ADVENTURES