It is almost a rule for every travel agency  to inform travelers about the epidemic side of the chosen destination. The place could be simply a dream but in one second, with known or unknown infection, it could turn our world into the worst nightmare. That is always that tiny border between the developed and developing countries, the sign that you cross the line and that you maybe won’t be 100% safe. The safety doesn’t mean only being safe from terror attack and domestic criminal but also being safe from being exposed to the local infections or  possible undiscovered biological agents or environmental influences we can’t handle.

The dangerous microbes are not the only concern for us. There are so many challenging parasites that are able to cause the horror for people too. They are not so elegant and high-class like viruses or some bacterias, their attack is more obvious and they often come from the dirt and the places with absence of modern sanitation. 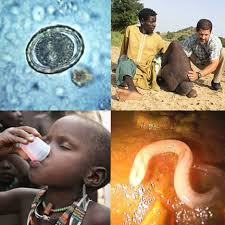 Could you imagine the human body full of worms? Even worse, the whole web of worms that are forming eggs and waiting for larvae to become active. Yes, we are talking about the Ascariasis disease, indicated by  Ascaris lumbricoides (A. lumbricoides), which is a species of roundworm. Both, adult human worms and larvae  live in small intestine and can produce the  intestinal disease. According to CDC, the infective eggs are those that we need to be aware of:“Ascaris lives in the intestine and Ascaris eggs are passed in the feces of infected persons. If the infected person defecates outside (near bushes, in a garden, or field), or if the feces of an infected person are used as fertilizer, then eggs are deposited on the soil. They can then mature into a form that is infective. Ascariasis is caused by ingesting infective eggs. This can happen when hands or fingers that have contaminated dirt on them are put in the mouth or by consuming vegetables or fruits that have not been carefully cooked, washed or peeled.Infection occurs worldwide in warm and humid climates, where sanitation and hygiene are poor, including in temperate zones during warmer months.”

The mentioned disease is relatively known to the global healthcare because of the fact that 10% of the developing world is fighting with the roundworms that hurt humans. When someone is in the region where the soul could be possibly contaminated with the  Ascaris eggs, then it is definitely recommended to be careful with the procedures of biological safety and clean surroundings of the food and water. The children in those areas are first among infected because they are playing around and do not take care about the necessary hand washing. That is exactly how eggs come to the house or even the food and water reservoirs.  One doctor managed to describe the whole travel process of the Ascaris into the targeted  human body:“After ingestion, the A. lumbricoides roundworm reproduces inside your intestine.Swallowed eggs first hatch in the intestine.The larvae then move through your bloodstream to your lungs.After maturing, the roundworms leave your lungs and travel to your throat.You’ll either cough up or swallow the roundworms in your throat. The worms that are swallowed will travel back to your intestine.Once they’re back in your intestine, the worms will mate and lay more eggs.The cycle continues. Some eggs are excreted through your feces. Other eggs hatch and return to the lungs.”

The picture is not encouraging  especially because there are no symptoms that occur so the diagnosis could be sorted out. Sometimes, it could be some kind of abdominal discomfort or coughing but the clinical definition failed to be formed and that is why many people do not have a clue that they are infected and that they are available to spread the infection further.  However, the infected person can develop nausea, vomiting, irregular stools and also the weight loss. At one critical moment, the worms will be visible in the stools and then the infection is really severe.

There is a treatment of this disease, Anthelminthic medications, particularly albendazole and mebendazole, that  are the  drugs that help the body to eliminate the parasitic worms. It takes for 1-3 days for a human body to be cleaned but it also depends on the stage of inner infection. The medical experts believe that prevention, as always, is better solution than any of the recommended chemical ideas. In developing countries, there are potentially risk groups, like preschool and school-age children, women of childbearing age and pregnant women and men with the professional  risk to be exposed to the infection. Many clinics organize so called preventive treatment and this is the procedure that is accepted as the right one by the WHO too.There are also the set of things we must to do if we do not want to deal with the Ascariasis disease. First, we must keep water clean which means to boil or filter the water in the areas with the high risk. Second, we must inspect the food facilities and control the food preparation process. The food we consume must be absolutely approved by the local  sanitary authority. It is also very important to chose the clean rooms for sleeping and bathing because of the worm’s capacity to travel without limitations.

This disease is not hazardous as many others but it could be among threats if it is not properly diagnosed and responded. Usually, after the medications is given, the patient is in recovery but it depends on the level of infestations.The rare situations are those when the disease is not defined in the right time so the internal worms activities are making the tunnels within the human body. That could indicate the gastrointestinal complications and intestinal blockage. In that case, the surgery is the only effective treatment.

The system we live in is not only the political or economical, it is also the ecological and we share it with many visible and invisible residents. There is a place for everyone but without mutual respect for the borders, it won’t be settled a  peace between humans and nature. It will be a war, an ultimate war for final survival.

BEFORE IT HAPPENS:PLANTS STRIKE BACK?