HOW ONE SMALL  RELIGIOUS GROUP HAS CHANGED THE ME LANDSCAPE ?

THE POWER OF STAYING NEUTRAL IN THE  WAR AMONG ALL

THE SONS OF GRACE: ANCIENT DIPLOMACY OR GOOD POLITICAL LUCK

The legendary ethnically Syrian collage hides so many exotic communities and religions that is a challenge  for researcher to reach them and to represent them to the rest of the world. It is fascinating to note that Syria, the last secular Muslim state in the burning area of the Middle East, was a shelter for so many different identities, which have  found their peace there.

Not many of us heard about the Druze. Actually, I was very intellectually ashamed that I didn’t know much about them before I decided to open this issue and to inform not only my readers but also myself.Facing up with the deep ocean of unknown is like discovering underworld full of secrets which desire to be brought on the light. The same is with the journalism – you write and you inform.Not only that, you keep the stories and heroes  alive long after they are gone. Maybe that is some kind of holy task and specific journalist’s oath. To highlight shadows.

The Druze got their name from   درزي‎ , Arabic word what came from the links to the preacher, Mohammed bin Ismal Nashtakin ad-Darazi, who is now considered as heretic but in that period of time, he was empowering the secret movement with the main purpose to keep the Sessions of Wisdom and to spread it among those who see but because of the historical disputes, schismatic breaks   in religion  in 1016 ad, and many following problems, ad -Darazi lost his importance for the movement. In the meantime, they were labeled as Unitarians. The name Druze was activated many years later, when this sect became more popular and with bigger influence.According to some evidences, they were founded in Egypt by al-Hakim bi-Amrih Alla and they belong nowhere but every land they live in is their heartland.They migrated to Lebannon, Syria and Israel,but some of them could be also seen in other countries.  Their race cant be determined because it is a mix of Arabic,European, Iranian and Kurdish ethnicity. Something which keep them united is their holy believes and the efforts to keep themselves isolated as well as to keep safe their religion.It is stated there are about 700,000 and up to even 2 million Druzes worldwide but the top goal of the Druze community is secret religious practice, political neutrality and no deeper relations with non-Druzes.

Their faith is monotheistic and belongs to Abraham’s religious stream but it is also based on the teaching of  Socrates, Plato, Aristotle, Akhenaten, Hamza and many other philosophers. Because of strong philosophical approach, their main book is The Epistles of Wisdom(Kitab al Hikma).This is enough to show us that there is no pure typical monotheistic religious pattern but rather the well designed package of Gnosticism, Neoplatonism, Pythagoreanism,Ismailism, Judaism, Christianity and Hinduism. This doesn’t mean they are following everything here mentioned but they are taking different elements from each one  to build their own unique structure of faith:”The Druze religion is an outgrowth of Islam, although Muslims disavow it. The religion also incorporates elements of Judaism and Christianity. When the religion was established, its founders were influenced by Greek philosophy and Asiatic thought. Their progressive ideas—including the abolition of slavery and the separation of church and state—were considered unorthodox and placed its followers at risk. This cloak of secrecy continues today.The tenets of the Druze religion are secret and mysterious, even to many Druze themselves, since the faith allows only a limited number of elite men and sometimes women, calleduqqal(‘the enlightened’), to study and learn all of its aspects. The uqqals oversee the religious life of their particular community, acting almost as intermediaries with God. Other Druze, known as thejuhhal(‘the unenlightened’), are not permitted to access the religion’s six holy books but are given a simplified outline of their faith in the form of a strict code of moral and ethical behavior.The seven duties that all Druze are required to observe are recognition of al-Hakim and strict adherence to monotheism; negation of all non-Druze tenets; rejection of Satan and unbelief; acceptance of God’s acts; submission to God for good or ill; truthfulness; and mutual solidarity and help between fellow Druze. While they are respectful of other religions, the Druze are convinced that a severe judgment awaits all non-Druze.” This sounds something between religion and high philosophy, dressed in discretion for a security reason but also with an aura of cosmogonist approaches. The Druze also like Alawites use the chameleon capacity and they learnt to “worship as Muslims when among Muslims, and as Christians when among Christians”. Such a capability helped them many times in wild religious history to hold on their basic faith with no distortions.

Their believes in transmigration and reincarnation of the souls make them similar to Alawites but there are many   aspects which turn them into very special secretive  theologian community. Their central point is definitely the union with the Cosmic Mind after the successive reincarnation. They are strict about souls and bodies connections. The human soul will go only into the human soul. Man will be again man. Woman will be again woman. The Druze will not come in the next life as non-Druze. The final merging with the promised Cosmic Mind brings also the final happiness.

Their language is a form of Arabic and they proclaim peaceful conception and unitary among people. Even their flag without  real homeland,  symbolizes the religious strength in temptation times. They usually deal with the 5 colors or so called  Five Limits:green, red, yellow, blue and white. Each of them represents some element of their faith. That also further means that the Druze are known as very loyal residents of the country they live in. They always support that country and community and never oppose it.For example, these Arabic-speaking people are in Israel considered as very faithful IDF soldiers. The same is in Jordan , Lebanon and in Syria.

Their current position in Syria is very endangered however. Since the conflict began, the Druze tried to remain neural and to not pick the sides. On the another side, Jabhat al-Nusra as well as Syrian soldiers tried to not get the Druzes into the war. The supporters of Nusra rebel  group are aware of the loyalty of the  Druze in the future  Syrian political choreography but in the beginning of this chaos, the Druzes were killed by some fighters of Nusra, who refused to follow the leader’s view on Druzes and wanted to treat them as enemies. Abu Mohammad al-Golani, the head of Jabhat al-Nusra ordered to his people to protect the local residents and to not revenge on them. That was a pure political calculation and indeed a mask for real plans which will include the Druzes in certain time as the group of 3% Syrian population. Some Druzes are afraid for their safety. They are sure that Assad’s regime will not endure much but they do not know how to support and how to make a good strategy against extremists and terrorists. 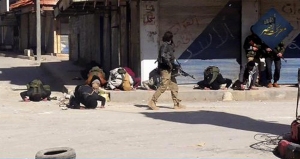 For Islamists of ISIS, the Druzes are even worse than other infidels. I found one interesting text on some Islamic portal regarding the Druzes:”The fact that these groups are kaafirs is something concerning which there is no dispute among the Muslims. Rather whoever doubts that they are kaafirs is a kaafir like them. They do not have a status like that of the People of the Book or of the mushrikeen, rather they are misguided kaafirs and it is not permissible to eat their food, their women may be taken captive and their wealth may be confiscated. They are heretics and apostates whose repentance cannot be accepted, rather they should be killed wherever they are found, and they may be cursed because of what they are. It is not permissible to employ them as guards and gatekeepers. Their scholars and leaders must be killed, lest they lead others astray. It is haraam to sleep with them in their houses or to be friends with them, or to walk with them or to attend their funerals, if their death is announced. It is haraam for the Muslim authorities to neglect to carry out the had punishment that Allaah has enjoined by whatever means they see fit”

I believe this is more than a radical answer on the Druze issues but the Islamic State by itself has a problem to categorize the Druzes. They only see them as enemies because in their extremist views on Islam those people do not even deserve anything but death. The villages of the Druzes are endangered and some Druzes asked for help from Israel  and the rest of the world.They know that if ISIS gets into any village of the Druzes, it will be the bloody session. The Druzes are good fighters and they are ready to defend their families and believes but like Yazidis, they want primarily to protect their secret theology and the future of their deep teachings. That means they will not resist to break their unitary concept and  peacemakers theories to defeat the evil of terrorism.More than paradox is what one ISIS militant   wrote  about the  Druzes as about hypocritical and dangerous:”They claim to carry the banner of peace and reconciliation amongst people, and they talk about uniting people in order to deceive them and lead them astray from their religion. When the opportunity arises, when they become stronger and find supporters among the ruling classes, they show their true colors and proclaim their real beliefs and aims, and they start to promote evil and corruption, and try to destroy religious teachings, sound beliefs and morals.”

The Druze are sons of the grace, free philosophers who modified the main monotheistic religions and colored them into new hope for ultimate happiness.  Their political and social role in the Syrian war is more theoretical support from the behind to the peace building than the real fight against the Islamic  terrorism. They felt on their own skins that being politically neutral opens new dangerous zones of being exposed to those who have no sympathies for opportunists. The Islamic State for sure will not have an understanding for those who they consider as schismatic insult for  Islam. Hoping to be helped by international community will lead them to the feeling of despair when they finally see that there is no emotions but only pure interests.At this moment, none has an interest to protect Druzes. Maybe only Israel because they are aware how much the Golan Heights is sensible on the terrorist activities and how many Druze have already fled  to Israel from Syria, being afraid for their lives because of the growing ISIS presence around the villages on the Syrian border with Israel.  The rest of the powerful actors are still waiting for the Syrian post-mortem  partition and division of assets. Risking to lose any of pawn on the chess table for and because of the Druze would be a diplomatic suicide.

The courageous Druze people have shown that their extraordinary religion based on the abstract philosophy and their social concept of union of all people imprinted many changes into the soul of Levant. It is for expecting that this small but devoted Druze force will continue to shape the ME face and to even give the unforgettable ankles.

“Reason is above all” and “The pen is in thy hands, write and fear not.”

2 thoughts on “THE SYRIAN DRUZE:ESOTERIC INFIDELS IN THE LAST BATTLE FOR THEIR HEARTLAND”

THE QUR'AN ON THE CIVILIZATION CROSSWORD:BEHIND THE SECRET