WHY MUSLIMS HAVE A DISLIKE FOR JEWS AND VICE-VERSA?

“Darkness… When everything that you know and love… is taken from you so harshly… all you can think about is anger, hatred, and even revenge… and no one can save you.”
― Masashi Kishimoto 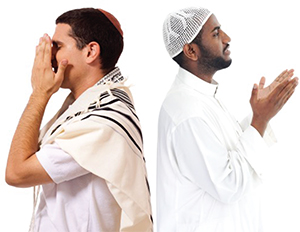 When we love, we dont have time to hate. We only hate when we are hungry for love, for understanding, for a chance to feel deep emotions which will bring us on the magical carpet and offer us our own never ending story . There is no a single human being in this world who can hate without being hurt by love before. Love gives all but also takes all. Sometimes and for someone, hatred is better than any love. Only sometimes and only for someone, to hate means to be alive. Different people and different life stories but they can all be summed into one: the society by itself, feed by love or feed by hatred. What is society than the cocktail of many individuals, with all of their own perceptions of tradition, culture or religion. Many frameworks in one and collective, which could be used or abused. As we wish.

Getting deep into the book of animosity between Muslims and Jews is not an easy task and definitely is not the professional adventure but rather the spirit challenge. I do not like to label people here and to openly come out with the ignorant conclusions that all Muslims hate Jews and that  all Jews cant stand Muslims because there are also many  exceptions of it. I believe I am trying to discuss in this article of myself what is behind the scene of  some kind of the historical distrust between Muslims and Jews and in which reasonable way that could be presented or eventually explained. In medical world, the hope for the disease’s cure  starts with the good diagnosis.In political world, it is the same. How will you treat the consequences when you do not know to recognize the indicators? No chance at all.

It is a matter of the fact that  many Muslims do not trust Jews and  many Jews as well  do not feel comfortable with Muslims. The main portrait of this antipathy is definitely the relation between  Israeli Jews and  Palestinian Arabs. The stereotypes are the trap for the science and I believe that there is a certain level of distrust between the mentioned groups but it couldn’t apply on the whole Muslim or Jewish world. First of all, not all Muslims are Arabs. The second, Not all Arabs hate Jews. On the other hand, there are a lot of Jews who are in good and healthy cooperation zone with Arabs so this prejudice would immediately fail if it is not 100% accurate. 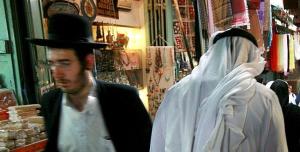 The journey back into the religious history and digging out the old holy  feelings from the both side could be a science fiction project  for me but even if I stay on the ground of my personal observation of this issue, I think I am doing something important for the whole civilization, bringing us closer to each others on the highway of suspicion.

To understand Muslims and Jews nowadays, we must understand them in their beginnings. We are all humans so how can we separate ourselves into the religious communities and pretend that we have more differentiates than similarities. Isnt the main point to be good and to not do to others what you wouldn’t like them to do to you?Why so many disputes about God when he loves all his children equally? It is like you try to see which wing the bird loves the most: left or right. The bird is complete only with the both of them.

Abraham. The religious hero of all people of the books. Man with two sons. One son with the Egyptian slave woman, Hagar. The another one with the regular wife Sarah. The name of the first son was Ishmael:“In Genesis 16:13-16 the Angel of the YHWH told Hagar (who resented the fact she had conceived) that her son Ishmael would live and end up being ‘…a wild donkey of a man, His hand will be against everyone, and everyone’s hand will be against him; and he will live to the east of all his brothers.’ Later, Ishmael became the outlaw son, the rejected in some point of view, because we know that after the Isaac came as a promised Abraham’s son and the one who will keep blessings from God, Sarah convinced Abraham to send away  Hagar and Ishmael  and to stop two brothers to fight for Father’s attention and love. Ishmael was  more aggressive and mocked Isaac whenever he had a chance.Anyway, God didnt forget Hagar and Ishmael and he promised that wild and  bitter Ishmael will be the father of many great nations. Hagar and Ishmael went to live in the region of Hejaz, which later will be known as the famous Arabian Peninsula and from older Abraham’s son there came  Midianites, Edomites, Egyptians and Assyrians. Christian and Islamic religion agree fully about the Ishmael great role in forming the Middle Eastern desert people and their historical shape.  What about Isaac? The Covenant was made with Isaac and his descendants, later Jews. He was the son of the promise. The potentially scarified son for the future of the world although the Qur’an Noble  claims that Ishmael was the one, promised and chosen for the Covenant with God. So if the Isaac was the one, the promised land of Israel belongs to Jews. When it comes to Ishmael, the promised land of Israel then should belong to Arabs. Muslim people believe that Jews reordered the Bible so they can have a right, based on religious text, on Israel. It is more than delusional that religion of that kind was ever changed because the Old and the New Testament both agree about the final Covenant and that the land belongs to the chosen people. The potential that belief is abused for the purpose and not the result of the  spirit of YHWH, then we could consider all religions as fake and manipulative. However, we do not analyze here  their latent ways of control and abuse of mass but their historical meaning and point in the flame of thousand old conflict between Ishmael and Isaac, transferred onto Muslims and Jews.  Maybe this doesn’t picture anything and maybe tells us all we need to know. Both of the people think they are chosen and both of them believe that the holy ground of Israel belongs to only one of them, like the coexistence isn’t possible. It is possible but it is not desirable by those who love to mix politics with religion and to use  that toxic spice for selfish  economical purposes and greedy motives which have nothing to do with ISHMAEL or ISAAC. The reality is that those two half-brothers hadn’t sympathies for one another but it is logical if we consider how Abraham and Sarah treated Hagar and Ishmael. Instead of unity for the family and God and making kingdom of two strong brothers, Sarah divided Father from Son, to protect another Son for God. All good intentions. Maybe every woman and mother would do the same. But, lets think for a moment if she was acting differently. Where would Ishmael and Isaac go and what they would have made together? Maybe Prophet Mohammed then wouldn’t have a reason to establish Islam as a new religion and to confront the previous one. Maybe Israel then wouldn’t be a bloody ground for all, for Muslims and Jews both. Maybe they all would have been together, celebrating one God only if Sarah and Hagar would have influenced on Ishmael and Isaac to put down bad words and to hug each others like brothers do, without evil words, without competition, without hatred. They fought for Father…and now Muslims and Jews are fighting against each others again for Father, but from above, for God’s blessing on one land. They both have a right to exist. And to coexist. It is not anymore about the religion, it is about the politics. Israeli nation must be accepted and protected like any other nation. This is even more specific because the small Israel is among the bigger Arabian neighbors which have territorial pretensions and old diplomatic tensions. It seems like Isaac is still fighting to convince older half-brother Ishmael that he is not doing anything wrong. Only living. Ishmael is still upset…because he was never sure that Father loves him as he hoped for. He is deep unhappy and try to feed bad wolf within instead to call the good one on the surface. If love doesn’t work immediately, increase the dose, you wont ever wrong.

The Christians are somewhere in between. Not fully accepted from Jews and not understood by Muslims too. Muslims and Jews will never agree that Jesus is Son of God.Christians will never forgive the Jews how they betrayed Jesus and they will never overcome the Islamic view on Jesus, that he was only a good teacher and prophet.

It doesn’t depend from which side we look on the conflict, it will always be there. Not because  of  Ishmael and Isaac who  were too stubborn to solve their childish jealousy, not because  of Sarah and Hagar  who weren’t enough smart to deal with their woman’s nature of suspicions,  not because of this or that, but because  of group of greedy evil  people who find the painful points on the weak  body of our civilization and then use it and shooting with the arrows of provoke,  anger, madness and fake promises.

How can anyone think that bird can fly with only one wing? Maybe for a while but soon will become  an easy target for  predators. Its the same with the people. Divide et impera. Old Latin saying. Says all we need to know. Throw the bone to the hungry dog and he will be thankful forever. Then take it from him, will hate you for eternity. This conflict is deep in religious way, complicated in political prism, but it could be solved with emotional intelligence, through the pointing on similarities instead of differentiates.

There is no God who is immune on people who suffer. There are so many people who make other people suffer.

Ishmael and Isaac were brothers and no matter what hatred later said, blood in the veins of their descendants will always be  fiery and wild, but brother’s blood.

Pray for peace in Jerusalem .

3 thoughts on “ISHMAEL AND ISAAC: THE (IM)POSSIBLE ROOTS OF ANIMOSITY BETWEEN JEWS AND MUSLIMS”

THE SULTANATE OF OMAN:TRUE ARABIA AND ZERO TERRORISM

THE YAZIDIS: LOST IN THE MIDDLE EASTERN FLAME