HOW WE SEE ISLAM ?

HOW ISLAM SEES US?

WHERE ARE THE BOUNDARIES BETWEEN FAITH AND JIHADISM?

I am sure that there is no religion nowadays which is more controversial than Islam. Islam is the main topic among scientists, atheists, religious fanatics, politicians, political amateurs and among those who lost someone because of Islam. Islam is a religion, political system, doctrine and ideology. Islam is connected with radical movements what flows into terrorism but it still justifies itself through the moral standards of any religion.  Islam is everything you can imagine because Allah knows everything and you, Kafir, you know nothing.

Considering Islam without understanding its dualism would be analytical suicide. Because, Islam has the trap of having  opposite meanings verses  stated in Qur’an but all of them are correct. It is very interesting to follow the statements in Islamic Holy Book, and to see how they have been changed from one mood to another, from benign to malign observations. The famous expert for Political Islam, Bill Warner introduced us with the dualism in Islam, based on Prophet Mohammed life time:“The first step is to put the verses in the right time order, collect and categorize all of the similar stories. It is at this point that the missing parts, or holes, in the document become apparent. The life of Mohammed fills in and explains all the gaps and all the confusion falls away. Mohammed is the key to the Koran and Islam.The doctrine breaks down in time into Mohammed in Mecca (the early part) and Mohammed in Medina (the later part). In essence, there are two Korans, one written in Mecca and the second Koran written in Medina.” The two phases in Qur’an teaches us that one is dealing with tolerance and the another one is coming up with intolerance. Which one is more correct? The better is the last one, which is deeply in dark waters of religious hate but based on interests of Islam, the previous or the earlier also could be used and misused as the correct one. None can say that any verse is false because they all come from Allah and they are all given for  Allah’s Sake and because of His Mercy. This dualism is a typical hypocritical tool and it is more dangerous than verses by themselves. An average Muslim can quote his beloved Qur’an two times in two different colors and whatever you say would be used against you. If they want to fight against us, they will find enough adequate quotes and if they want to comfort us and to convince us that we didn’t interpret  good as we should have, they come up with another statements. However we look at the Holy Book of Muslims, we must admit that it is a super cover for all deeds, no matter if those deeds are made by saints or sinners.

Personally, I think this is one of the most abused verses from Qur’an. Whenever the western world is faced up with the growing Islamic terrorism with jihad ideology in the background, the Muslim world replies with the above mentioned verse. Then we have media who quote this together with apologetic thinkers who really believe in this or didn’t analyze the whole Holy Book.  For understanding this paragraph, we need to understand the ideology of Islam and what it fights for….without having a complete picture, we will be blinded with something which is not so peaceful as it seems to be.Now, lets look on this verse again…..close….first of all, this doesn’t apply on murderers or others who bring injustice in the system. Then, killing them would be a justice. The main problem for one  Muslim society, is among  those who deny Allah and Islamic religion. They can not be innocent. In other words, killing them wouldn’t be sin. It would be a jihad.Jihad is allowed. Jihad must be done.

“They would have you become Kafirs like them so you will all be the same. Therefore, do not take any of them as friends until they have abandoned their homes to fight for Allah’s cause (jihad). But if they turn back, find them and kill them wherever they are.”((Qur’an, 4:89)

Totally different story. Sometimes I have a feeling that Qur’an has a bipolar personality, almost like a human being. It could be all you need in one single moment and you need a lot of analytical approaches and synthetic work to get to the core  and make it naked and show the real context of it. 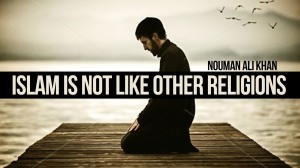 The tolerant verse about killing the whole mankind through the one innocent lives is only applicable on Muslim community. Here is exactly the reason why:” So, strictly speaking, verse 5:32 is only applicable to the children of Israel (the verse says it). Any way, to be fair, we shall ignore this limitation and concentrate on the wider meaning:On the surface of it, the first sentence (Islamists often quote only the first sentence, conveniently hiding the next sentence) of verse 5:32 seems very munificence and non-violent. What does the next sentence say? It says clearly that even when Allah sent His messengers many people disbelieved them. Muhammad was one of such messengers, the best and the last. Therefore, ‘those who disbelieve in Muhammad and Allah (i.e. the non-Muslims) are the transgressors’. Evidently, the non-Muslims are the mischief-makers on earth. Logically, these non-Muslims do not fall under the purview of the merciful provisions of verse 5:32. In simple language, this means: verse 5:32 is applicable only to the Muslims.” 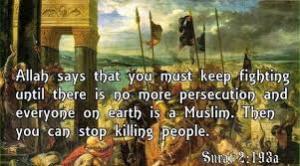 There are also many others verses what have been misused by Islamic thinkers and also by jihadists. It is so interesting to note that one verse could be exploited by Islamic apologetic person to convince us that we didn’t understand Qur’an properly  and that has only a peaceful meaning but also could be a part of the wildest militant propaganda against kafirs. I always emphasis : it is all about interpretation and the interests behind it. If I have a goal to justify Islam, I will bring one verse and wrapped myself about those parts which work for me and my ideas. If I want to question Islam and its  military meaning, I will find another verses and turn them into the front page to ask for people’s attention and anti-Islamic mood all over. I am using  none of these techniques here and now because I believe that my job should be based on truth and not on apologetic access but also not on hateful mission. I simply don’t need islamophobia because that term was made by non-informed people who believe they know something.I do not need hate to write about it. I have facts and I am happy to analyze them and to offer my views. It doesn’t mean I am absolutely right about it but means I am aware of it and I can not be tricked by words.

I believe that Muslims see themselves through their own eyes and through the eyes of us, infidels. They are attached to the faith they are doing everything for Allah but its very surprising they are forming their global behavior towards the reaction of western world. They hide their real interests in the global confusion about Islam and using taqiyya and kitman as the approved methods of deception for Allah’s Sake, they are moving their religious goals forward.

Many thinkers and supporters of the Political Islam theory who I belong to , inform the world to start using the term JIHADISM instead of only Islamic terrorism. because, Jihad is the crucial part of Islam and the whole Political Islam ideology is based on violent jihadism which we see in the form of westernized term terrorism. Terrorism could be made by non-Muslims too but jihadism is only Muslim technique and represent only them and their doctrine.

I see Islam as a religion but above all, Islam is a political system with the accompanied ideology. It can not be understood only by religious analyzes but also by military and political overview. The violence which jihadists use to implement this ideology worldwide , find its courage in ancient words of Prophet Mohammed. Some of His words are misused, some of them are damaged and reshaped.

I still do not accept that any God makes a difference between people and believers. If he is ONE GOD, all children belong only to Him. All differences and all wars are made by  people, just and only by people  people who never found God in themselves.

For Muslims, Islam is a religion of peace. For infidels, it is a war ideology. For analysts, it is a most often abused term and idea in recent time.

One thought on “ISLAM: RELIGION OF PEACE, POLITICAL CONCEPT OR ABUSED DOCTRINE?”

ROMEO JIHAD- YOU CONVERT TO ISLAM BECAUSE YOU ARE IN LOVE