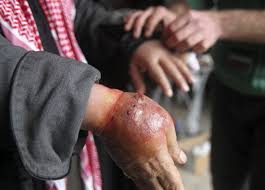 In the age of unknown microbes and deadly diseases caused by them, terrorism has a lot of different possibilities for any kind of asymmetric war. One of them is biological terrorism as a specific form of non-conventional terrorism which includes the misuse of live pathogens against humans.

ISIS-ISIL-DAESH is not capable to produce qualitative biological weapons at this moment but there are some technical and natural  circumstances in this region, full of sand dust and blood, what make conditions for  terrible health crisis and new coming diseases to be occurred.  Those diseases will hit poor people who are suffering on daily basis from Islamic terror,  but they could also grow up into the deadly epidemic trend, which wont be limited on the Middle East.

In April 2015, there were reports about the number of terrorists from DAESH who have been  infected by Flesh eating bacteria. The main problem was noted in Syrian city of  Raqqa, where poor sanitary and health situation make a big problem for people who are trying to survive,  not only bombs and terrorists but also many natural invisible enemies. But, what is very important to analyze here is the fact that Flesh-eating bacteria and flesh-eating disease known as Leishmaniasis disease arent the same, as far as I understand the epidemiology vocabulary.Unfortunately, media keep informing us that those two are the same disease. It is so obvious that they have similar “expression” on the patient, but there are some differences. Flesh -eating bacteria or Necrotizing Fasciitis  is based on Streptococcus pyogenes bacteria which leads to bacterial infection toxins and total damage of the skin, muscles, and fat. 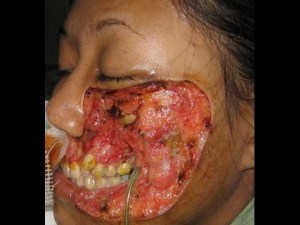 Flesh-eating bacteria-Necrotizing Fasciitis is based on Streptococcus pyogenes

Leishmaniasis is a parasitic disease caused by infection with Leishmania parasites, which are spread by the bite of infected sand flies. There are different forms of leishmaniasis disease  in people. The most common forms are cutaneous leishmaniasis, which causes skin sores, and visceral leishmaniasis and affects several internal organs (spleen, liver, and bone marrow). 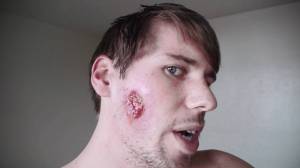 The way that this endemic disease looks like reminds on the flesh eating bacteria results, but we deal here with the parasite. It is very important to say that this disease is very common for the  Middle East area for years back but with the destruction of health system, especially in Syria, this “Aleppo evil” as it is known in records, come back stronger and more aggressive.  Some sensational journalists write that DAESH  terrorists are spreading this disease by purpose, what I would consider as failure of an objective reporting. They are terrorists and they are fanatics but they cant do something which only nature can make and can produce. Some sources claims that Kurdish medical staff is informing about death bodies on the Syrian streets as a possible zero ground of nulta patient. That would mean that sand flies are sucking blood from the death people which is incorrect. They only want living people and that is how the disease is spread. DAESH terrorists couldnt do much about it and such a kind of spectacular announcements in media make people and readers worried and scared but the real background is something else. The collapsed medical infrastructure in Syria and Iraq as well as the lack of drugs for a successful treatment open the door for the increased amount of sick people and failed medical response let us think that we are facing  with the new sand plague. Amphotericin B is missed in medical stock in the new terrorist land, so the patients have no chance to be treated the best way. Many of them dont react at all and the disease progress and ends up fatal. Some of them are fleeing as a refuges into another country and they can carry this disease but for this parasite is very hard to survive under  cold clime conditions.

Instead of worrying about the rumors that DAESH terrorists are misusing this parasite into its own bio terrorism plots, it would be better for the international community to send medical help to endangered people and to those who are among possible infected and to work on preventing the spreading of the evil of Aleppo which is old for years.

Media war brings a lot of failure in the objective informing. It is normal for the sides to keep up with their propaganda but I am against spreading any panic but rather for spreading valid and accurate information, based on scientifically approved conclusions. Nothing is easier than to manipulate with those who are ready to be manipulated. Being in any kind of conflicts means opened road for use of  all kind of weapons. But being in war, even if that means media war, brings some responsibility for those who inform. Write only when you are sure what you have to say and choose the way how to say it. Words come easy but their consequences are endless.

7 thoughts on “Flesh eating disease against DAESH: damage control out of terrorist’s hands”

KAFIR AND MUSHRIK-WHEN ISLAM GIVES THE NAMES TO NON-MUSLIMS