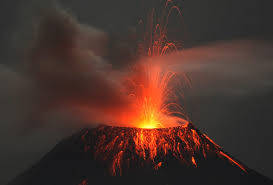 THE MAGMA  AND THE VOLCANO HIKE

“Volcanoes are one way Earth gives birth to itself”

Do you love volcanoes ? I do, so much. They are showing the silent power of our Planet and its marvellous and angry nature.  The volcanoes are special openings in the Earth‘s crust through which magma, volcanic ash and gases are going out on the surface. This is a long process that is happening for thousands of years in underground, caused by a pressure of dissolved gas. The liquid magma is actually driven by gas and its rise through the cracks of the Earth is subliming the whole pressure, turning the gas into bubbles and allowing to lava to get out. This escape from the womb of our Planet could be benign and malign, depending on the moment when lava reaches the surface and on its chemical composition. Those lavas with more gas are usually expressed in fire fountains and big explosive eruptions but they are known as explosive volcanic activities. The non-explosive volcanic activities contains more silica in the lava which is forming lava flows and lava domes.  In both cases, the Earth is colouring itself in fire, passion and warning of danger for people. If we take a look in the history of environmental catastrophes, the volcanoes and its wild behaviour have contributed a lot in the proportion of natural disasters.

Nevertheless, the volcanoes have a very important role in our Ecosystem.Why? According to studies and research, the volcanoes have helped in creation of life, back in the organic evolution:“In 1953, Stanley Miller, of the University of Chicago, took two flasks – one containing water to represent a primeval ocean and the other containing a mixture of gases to represent the early atmosphere.Then he connected them with rubber tubes and subjected them to electrical sparks to represent lightning.Within a few days the water contained amino acids and other organic compounds, demonstrating how Earth’s primitive atmosphere may have given rise to life.In the latest study Jeff Bada, a marine biologist at University California, a former apprentice of Miller, re-analysed the samples from the Miller experiment to determine if new chemical compounds could be detected using modern equipment.He looked at 11 of the original samples using contemporary analytical chemistry techniques and produced 22 amino acids, 10 of which had not been identified previously by Miller.His new research also suggests that lightning and volcanoes may have combined to spark early life on Earth. ‘We believed there was more to be learned from Miller’s original experiment,’ Dr Bada, told Science journal.‘We found that a modern day version of the volcanic apparatus produces a wider variety of compounds.‘This study suggests that lightning and the release of gases associated with these volcanic eruptions could have produced the necessary chemical components to give rise to early life, he added.” 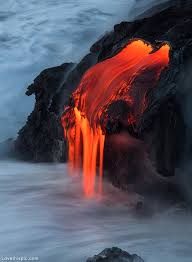 Now, when we know that volcanoes are manifesting the majestic strength of our endangered Blue Planet and its authentic birth all over again, like Fenix bird, how we can deny our desire to visit them and to admire their pure glory? Believe me or not, there are people who live for visiting volcanoes and even climbing their walls. Those nature lovers are also physically very fit and their adrenaline moves them to the limit of dragon‘s cave. Some people are simply in love with volcanoes and consider them as their greatest passion in life. What they are doing ? They are travelling worldwide, visiting volcanoes peeks and provoking their own deepest fear.  It is not easy to just pack your things and to fly somewhere where is a volcano. You need to be mentally prepared for such an adventure, because it could be your last one, especially when we talk about visiting actives volcanoes and their surroundings.

There is something magical about visiting volcanic craters and experiencing their retreated power. You managed to be there, on the top of your own world, reaching your own summit of the panic. If we allow yourself to be path seekers rather than path finders, we will achieve that harmony with the nature or the total blackout. One adrenaline volcano climber has described that feeling as disconnection with everything what was before and everything what comes after. It was all between him and volcano, the moment of truth, the reality of to be or not to be there where you dot belong to. I would say that every time we go there, where the power of Nature is sleepy and lurking on us, we are provoking the beast of revenge, we are starring the eyes of ur own mortality and we are signing our own  chapter of immortality.

What is so attractive about the volcanoes ? Simply all. They are mysterious and dangerous but always in silence unless they burn out in their own anger and turn everyone and everything into the ash and history.  If we recall the memory on amazing city of Pompeii  and Herculaneum, that have been destroyed by wild Vesuvius in A.D. 79 and almost 2,000 people have been killed by poisonous gas, we still know that this volcano could be awaken in any moment and could again repeat the Pompeii catastrophe, but this time in the surroundings of Napoli. This volcano is one of the most dangerous volcanoes in the world and still on the first place with its rough beauty and unpredictable character. Based on the writings of globetrotters, the Vesuvius and its area is almost like landing on another Planet. The local people still believe it is their Protector and they have no fear from this volcano mountain . The outside visitors are impressed with the contrasts over there, with the empty portray of Vesuvius and rich wine hills. The nature has it all under control and in perfect and sweet harmony, in spite of grey reminders of the tragic past. The Neapolitan countryside and amazing vineyards give the precious feeling of holiday in the area where volcanic strength is shaping the daily life.

The beautiful Italy is not the only one with awesome volcanoes. If it happens and you are somewhere in Guatemala, don’t miss a fact that there are over 37 official volcano summits.  Don’t miss them in Peru, Chile,Mexico, Costa Rica,  Ecuador but USA and Canada have also a lot to offer to nature adventure followers.  One of the most  breathtaking in America is definitely Mount St. Helens in Washington State, that stands proud on 2,549 meters with unforgettable view and hiking trip that can last between 7-12 hours. 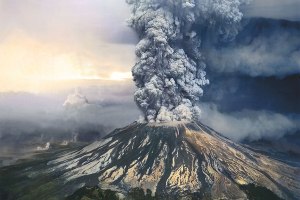 One volcano in Iceland, known under the name Thrihnukagigur is the only volcano in the world which can be explored on the inside. It is not active anymore so this kind of activity is allowed.  Before you organise your volcano safari, make sure you know what you are doing and how you will do it. That needs usually some time and engagement and also some amount of money so the adventure can be realised.  You have to research a bit and to be serious and honest about your body capability to accept this challenge.  The preparation and equipment depend on the route you will take and the goal you have. It is almost like a mountain climbing and it must be covered with good mountain gear and awareness that weather could be changed fast and that nature can punish very easy for every wrong step.Justin Wood is one of adventure travel program manager and he is advising about picking up a good tour for a beginner:”On the most basic level, volcanoes have fascinated humans from our earliest beginnings. When you climb a volcano, you have a spectacular view, you get a great workout, and you have all this cool geothermal and thermal activity: geysers, thermal pools, lava flow. The bottom line is you’re face-to-face with the Earth’s molten core. And our technology and monitoring systems have improved dramatically, so volcanoes are becoming more approachable.Look for a good hiking volcano that doesn’t have a lot of snow or ice, with a good established trail where there will be other hikers. There are a lot of great options out there for people. One is Humphrey’s Peak in Arizona. From the top you can see 360-degree views of the Grand Canyon all the way to Sedona and the Painted Desert.” 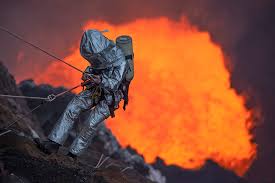 The climbing volcanoes may be a trend today but for some people is a lifestyle and individual ticket into the universe of endless possibilities. They do not care if they can solve it or not, if they will survive or not, they simply know they have to be there and they are attracted by the fire of the Planet soul. Sometimes that fire takes them forever and sometimes gives them a new perspective and the reason to fight again. Just like the scientists said, the volcanoes have helped the creation of life and if we star enough long in their burning core, instead of death, we may see the real meaning of life, it’s ancient beginning.

3 thoughts on “THE WOMB OF THE EARTH: THE VOLCANOES AND ADRENALINE FOR LIFE”

THE STALKER: HOW SERIAL KILLERS PICK OUT THEIR PREY?