THE PORTRAIT OF THE BIRMAN CAT

“What greater gift than love of a cat.”

The cats are amazing animals. Their unpredictable nature, the magic beauty and the wild heart have turned them into the second best friends of humankind. They have been cherished and condemned through the history of civilization but they have been always respected as unique creatures. It is stated that cats do not offer service but themselves. Some people have problem with their independence but the fact is that only special people can understand cats and their personality. They have been linked with underground world, death and devils in some cultures but in spite of it, some other cultures embraced them as gods. We cannot be indifferent when it comes to the cats, we can only love them or hate them. The choice is ours but the world belongs to cats.

Have you ever heard for the sacred cat of Birma? The special breed, the majestic princess of temple, the protector and companion of Kittah priests. There is a beautiful legend about the beauty of this cat:” Originally, the guardians of the Temple of LaoTsun were yellow-eyed white cats with long hair. The golden goddess of the temple, Tsun-Kyan-Kse, had deep blue eyes. The head priest, Mun-Ha, had as his companion a beautiful cat named Sinh. One day the temple was attacked and Mun-Ha was killed. At the moment of his death, Sinh placed his feet on his master. The cat’s white fur took on a golden cast; his eyes turned as blue as the eyes of the goddess, and his face, legs and tail became the color of earth. However, his paws, where they touched the priest, remained white as a symbol of purity. All the other temple cats became similarly colored. Seven days later, Sinh died, taking the soul of Mun-Ha to paradise.”

The breathtaking cat with clear blue eyes have been always considered very mysterious and there are some experts that claim that the Birman cat is a result of merging two other breeds: Siamese and Persian but it is still unknown how the goddess of temple have arrived into the rest of the world. It is written that the race has been officially registered with the French Cat Registry in 1925. However, during the World War II, they have been wiped out and their beauty has been unrevealed until 1965. 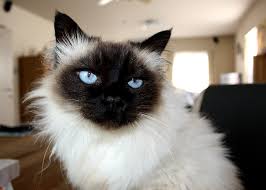 According to the information from the breeders, there are some standards about Birman cats:” Birmans have semi-long, silky hair, a semi-cobby body and relatively small ears compared to other cat races. In order to comply with breed standards, the Birman’s body should be of an eggshell colour or golden, depending on the intensity of the markings colour. The markings can be pure seal, chocolate, blue, red, lilac or cream. Tabby variations are also allowed. Tortie cats can be seal, chocolate, blue or lilac. Birmans have sapphire coloured eyes.The Birman’s coat is unusual due to the white ‘gloves’ on each paw. They are one of the few cat breeds in the colourpoint coat that has fingers and toes in pure white colour. The genetics of this feature may not be not fully clear, though a gene conferring the white ‘gloves’ has been identified.All Birmans are born white (as other colourpoint kittens are) and they start developing their colours at the age of 1 week if they have a dark colour (as seal-point) and at the age of 14 days, or more, if they have a clear colour (as lilac-point). The first part which develops the colour are the points of ears, nose and tail. The real colour is complete at two years old and after a wintry season.”

Their capturing look is not the only that makes them so special in the hearts of cat lovers. It is actually something about their friendly personality and the right balance between cat´s bossy style and dog´s never ending loyalty. This means that the Burman cat is not arrogant but curious and people oriented. I found amazing that this breed is enjoying being included in activity of his owners. They do not see any problem being cuddled and adored and they give back that love. This moment is precious since so many cats do not share the timing for emotions with their people.

The beauty with sapphire eyes is affectionate and highly intelligent to deal with the challenges of the environment. This characteristics turned this breed into the children and dog friendly but doesn’t reduced its original nature mixed with the touch of lost centuries and forgotten temples. The Burman cat is playful and interested in everything what is happening around her but she is learning fast what is allowed and what is not. Her temper and dreamy look gave this cat the attribute of one of the most attractive breeds in the world. If someone wants cat for a life as a faithful friend, the Birman cat is the best choice. This is not because of her appealing portray but because of her charming nature that melt the coldest hearts.

The German lady from Essen, Anneliese Hackmann, has discovered the beauty of the Birman cat and brought them into Europe. At this moment, she is a president of World Cat Federation but back in the 60s, she was asked by her friend to find him the Birman cat and to bring him in Eastern Germany. That was a great task for Mrs Hackmann and she managed to get the cat, after many obstacles. Her fascination with these cats didn’t let her to give the promised cat but to move her on the road of breeding this race. After all, her friend got the cute kitten but many people believe that the generations of first Europeans Birman cats have originated from her first cat, Nadine de Khlaramour.

The gracious donna with fetching eyes is gifted with good health and potential to adapt on the given circumstances. She is a princess from the castle but she loves sometimes being in the garden and exploring the unknown. Having this cat around gives a possibility to experience the real cat´s loylity and love. There are some of the cat experts that have written that this breed have protecting instinct and caring habits. That doesnt surprise at all since they have been known as soul guardians in the ancient world. Once upon a time, the golden shinning temples opened their doors and let their harismatic guardians with blue eyes among the people. With them, we are always in the light.

12 thoughts on “THE SACRED CAT OF BIRMA: THE CATS OF TEMPLE”

THE DREAM CATCHER: AMERICAN INDIANS AND ALL THEIR SECRET TALISMANS