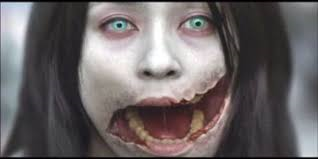 “This world, full of evil and violence, is hell itself. Don’t you think?”

Japan. One name that describes wonderful country with lot of mysteries and progressed people with great history. In recent years, I have often seen Japan in my dreams, its cherry blossom, fascinating temples and sushi. I do not know why and how, but Japan is always within me, like a never forgotten homeland from the previous life. I love Japan not only because it has some kind of magic attraction but also because it has some kind of exotic and dangerous beauty. 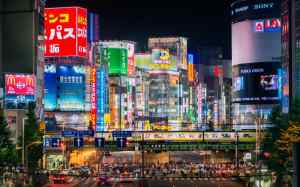 My friend Yoko told me that Japan is mystical land since the people are spiritual and sometimes even extreme in following the rituals behind the ordinary daily life. In other words, they are obsessed with paranormal entities and metaphysical experiences. This is the reason why Japanese horror industry is one of the best on the world. Their stories are not based on cheap scenarios but on the urban tales that have been the part of folk culture for hundreds of years. The Japanese stories are not written for public amusement, they are integrated in every single bone of the skeleton of Japan. You hear them, you have goosebumps and you know you will never dismiss them from your mind.

The parapsychology of Japanese is a subject of study itself. It is the proof that deep beneath the surface of controlled emotional intelligence, Japanese have the accumulated fears, concerns and hopes and those shadows sign the success of Japanese horror movies. It is not about blood and death; it is about being afraid to lose life. 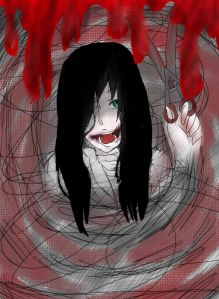 The first time when I heard about Kuchisake onna, I was impressed by the strong quality of the urban legend of Slit-Mouthed Woman. Then I researched a bit more and concluded that almost the same character exists in South Korean narration as the one of the weirdest urban legends of South Korea we know. The setting is different since the South Korean Kuchisake onna is a woman with red surgical mask, on the train station that comes to the lonely man and asks him if she is pretty. He does not see her face but he believes she is pretty. After he tells her that she is lovely, she removes her mask and shows the scary face. The man is now disgusted and after she sees that, he is punished with terrible end. This is very important to know because South Koreans try to aim the physical perfection and they do not hesitate to accept surgery as a solution for imperfection condemned by society. Being disfigured physically in South Korea is the worst nightmare so does not surprise that their creepy lady is the source of horrible urban legends. 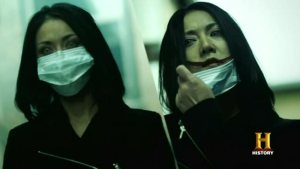 The Slit-Mouthed Woman of Japanese book of sinister saga is portrayed through the evil spirit of Kuchisake onna, the original version. She asks the victims:” Watashi kirei? Am I pretty?”, waiting for a reply. No matter what kind of reply is given, the picked up victim will be slashed from ear to ear. It is said that there is no right or wrong answer because the evil spirit seek punishing. Nevertheless, the legend offers a possible way out:” When she asks ´Am I pretty? ´, simply respond with a neutral or confusing answer (such as ´average´ or ´possibly´) and Kuchisake will ponder that reply for a second or two. Use that moment to escape the encounter and don’t look back. You may also try throwing her hard candies or fruit, and she will stop to pick up the treats to give you enough time to run.” In one stable and organized country as Japan is, this kind of legend seems primitive and regressed but actually, it is not. Japanese urban legends are based on the successful mixture of fiction and reality, they always express the hidden fears, and forbidden feelings of the society that is known as strict and disciplined from the outside.

Who was Kuchisake onna in the mythology of Japan? There are many backgrounds of this woman but according to historical writing, the most popular is one that presents her as the beautiful wife of fearsome Samurai warrior from the Heian period, 1100 years ago. Her beauty has been retold all over the Samurai area and numerous men dreamt about Kuchisake. The woman has been aware of her beautiful look and she was even a bit egocentric, playing with interested men and their expectations:” She was often heard to ask men to rate her appearance in the similar ways to Kuchisake. Somehow the Samurai found out that she was cheating on him. After he sliced her face open in the shape of a wide smile, he posed a question of his own. Who will think you are beautiful now? Not long afterwards, the unfortunate woman died. She became the vengeful spirit now known as Kuchisake Onna.” This version tells us how dangerous could be possessive love and egocentrism merged in one marriage, so the insecure man hurts his wife, giving her a Glasgow smile. The second version brings the idea of mentally instable woman that has been sent to asylum where she has cut herself and disfigured because of madness. Then she escaped the institution and stalked schoolchildren on their way home. This is the meeting point of the Japanese and South Korean urban legends of Kuchisake onna. The both societies share the same level of panic and phobia in spite of fact that they do not share the same anthropological and mythological ground.

The urban legends in Japan as well as in South Korea have the serious influence on people. Back in 1979, some Japanese reported they had seen the woman following young children. The warning was taken in some fanatical way so the schools have been closed for days as police have tried to find the mysterious woman. Then it is exposed in public that woman has been found dead, killed by car. The interesting remark about her death was the coroner´s statement that she had the specific injury: a torn mouth.

I find it amazing that many Japanese people have unstoppable anxiety when they even theoretically think of evil spirits. Kuchisake onna is not the only one danger from the shadow. There is one another ghost, Yūrei, portrayed all white with long black hair that covers her face. The character has been on rise after the Japanese and American movies “The Grudge” and “The Ring” but it is obvious that the picture of woman with black, long hair that hangs in front of her face is enough creepy to keep many sleepless in cold Japanese nights. This is related to the belief that reikon (soul or spirit) could become obsessed with anger, sorrow or lunacy and that is what makes this spirit cross over all boundaries and get into the water of revenge. The women are considered as emotionally weak and thus easy to be used as the shape for evil to come to the physical world.

The Japanese evil spirits are powerful and they cant be stopped. The possible way is through the use of ofuda – a Shinto talisman but it doesn’t promise a lot. Not everyone can follow the prayer sheets against Yūrei or Kuchisake onna but everyone can learn to recognize the real reasons of fear and those that are fictional. Some societies live on empowering the public agony or doing nothing to eliminate it with the logical explanations. Kuchisake onna and Yūrei are not only frightening urban legends but also the reminder that we can all be manipulated by our own psychological demons. In the Japanese hierarchy, the women have been always limited and controlled in their passion and love. Maybe the evil spirits presented in mystical women only seek for freedom rather than for revenge.

THE GHOSTS OF ILLINOIS: WHY CAIRO IS A FORGOTTEN TOWN?

MY OLD KENTUCKY HOME: FROM BLUE PEOPLE TO THE ANGEL OF DEATH