PLANET OF THE APES OR PLANET OF IGNORANCE?

“I’m a seeker too. But my dreams aren’t like yours. I can’t help thinking that somewhere in the universe there has to be something better than man. Has to be.“

The Nature is bleeding and people do nothing to stop the horrible destruction of our Planet. It is getting worse with every new day; we are reaching slowly the bottom of our useless existence. Instead of protecting the wildlife, we are protecting our greed. Instead of saving the Earth, we are saving our egoism and ignorance.

After the movie “Planet of apes” has questioned the human intelligence and offered the controversial thoughts about the progress of evolution, the portrait of humankind is not so brilliant. I do not know when and how, but the human race has betrayed Charles Darwin’s principles down on the road of survival. There is no surprise that animals show the higher intelligence as many people together as well as the emotional capacity. On the other side, Homo sapiens is falling into the trap of his own lunacy, selfishness and social disorders. Who could ever forget the wise words of the progressed ape Caesar in the “Planet of the apes”: „Freedom is never free!” The message of the film is deep. It is not a typical Hollywood brainwashing but a philosophical observation of humans and apes relations through the history of organic evolution. The point of the movie is that power always changes those who have it, no matter who they are. Unfortunately, the people have power at this moment and they have destroyed their genetic similar sibling species, the apes. 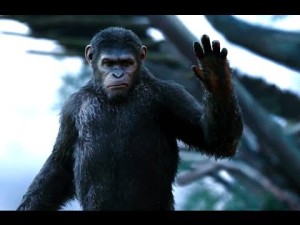 The majority of apes is really endangered and it seems that the terror they are under does not stop. Their natural habits are demolished, they are almost extinct. Among all of them, the mountain gorillas suffer in spite of the fact that they do not have many natural enemies. What is actually happening? Those giants live in the African region, around volcanic slopes but due to the civil wars, poaching and unrest in the countries that share this area, the life of mountain gorillas is full of misery. Their number has dropped down rapidly but the conservation efforts and devoted work of animal rights activists color slowly their story into optimism. 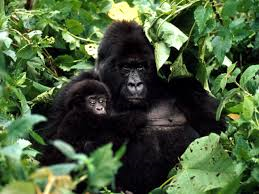 Their beauty is well described in the book “Gorillas in the Mist” of one woman who gave her life to save gorillas from death. The famous Dian Fossey, primatologist, inspired even movie industry to make a portrait of those powerful creatures from the rain forests, based on her awesome writing and research study. It is 32 years now since the mysterious death of Dian Fossey and there are still no clear information who is responsible for her death. There were only ideas that she was killed by poachers who had problem with her active work on protecting the mountain gorillas from poaching and trophy hunting:”Before Fossey’s work, gorillas had an appalling reputation as violent brutes that would kill a human on sight. Fossey demolished this myth. Living alongside a group of mountain gorillas in the forests of Rwanda, she showed that these huge apes are actually gentle giants, with individual personalities and rich social lives. In many ways, they are like us. But the mountain gorillas were also in terminal decline; their habitats encroached on by farms and overrun by war and civil unrest. Fossey spent her last years fighting an increasingly savage battle to save them, until she finally lost her life in 1985.”

She was not a real scientist, she was a woman with heart to feel and to fight for voiceless. At the end, her scientific notes and observations has launched primatology in new direction. The public has finally seen the gorillas, as they are, the caring social animals with good nature and brilliant and adaptable mind.

They are vegetarians that do not attack people without reason but try to defend their families if they feel themselves endangered. It is concluded that humans and gorillas share the same ancestor and during the evolution genesis, 10 million years ago, the species have separated. The strange sense of similarity is something that makes us trembling each time we look into gorilla’s wise eyes. George Schaller, one another gorilla researcher, stated that perfectly:” No one who looks into a gorilla’s eyes — intelligent, gentle, vulnerable — can remain unchanged, for the gap between ape and human vanishes; we know that the gorilla still lives within us. Do gorillas also recognize this ancient connection?”

Their current position on the wildlife scale of endangerment depends on human activism against poaching and successful circulation of information regarding their number and importance. The global wildlife protection must be forced on the local authorities to implement it and to control and punish those who challenge it. The majestic gorillas are not in the ownership of some national parks of Africa but the treasure of the whole world. They belong to this Earth and they have right to live here as much as we do. Their habitats and cubs should be legally   protected from any kind of industrial abuse or violence. The communities that hunt or even eat the meat of these animals should be educated to know that this kind of bush meat is capable to infect the consumers with the dangerous emerging zoonotic diseases. After the campaign is united and linked to the legal consequences of non-respect for gorillas, I believe that their number will be on rise.

7 thoughts on “THE MOUNTAIN GORILLA: ENDANGERED IN THE MIST”