FOLLOWING THE TRACES OF THE WITCH CITY 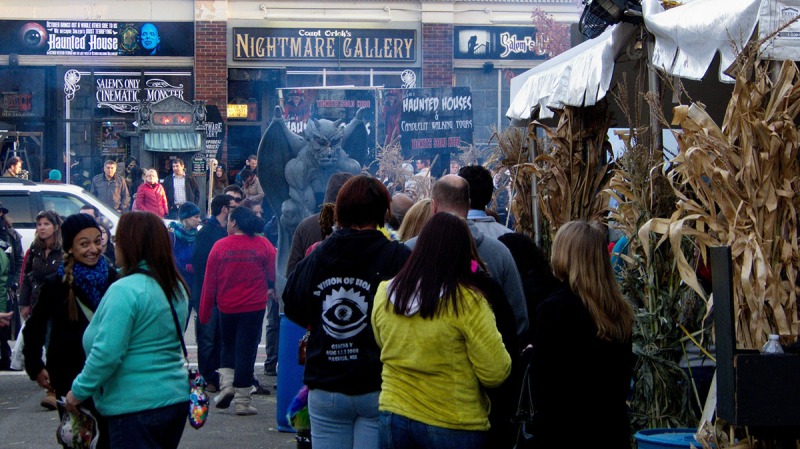 “We are the granddaughters of the witches you weren’t able to burn.”

The October is month of golden autumn that gives the nature the most fascinating colors. It is also known as a month of pumpkin pie, apple punch and Halloween.  There is no way to forget the beauty of the tenth month, because it is a full of small wanders that keep us excited all year long. The dreams and the reality cross each other while we smell the chestnuts roasting on an open fire and finding ourselves lost in the whole new world.

However, there are places and people that enjoy the timeless magic, almost as if they have borrowed the Hogwarts rhythm of life. Witchcraft and wizardry, the small secrets and the big legends.  The ordinary people and extraordinary powers. You can get into the other dimension and you can still be the part of this one. All we have to do is to reach Salem in Massachusetts and at that moment, the magic express will let us experience the centuries.

What is so special about Salem? Everything. That city has a spirit, it was born in tears and blood but it has survived the all scars of the cruel times. Being a witch city, even now, in modern and open-minded America, is still a sensible issue. That generation of people, with the DNA of the burnt witches is the one that has built the town and has given the life back to Salem, after so many deaths.

The tragedy of Salem was directly related to the tragedy of group of  women accused of being witches, back in the spring of 1692. That was simply colonial Massachusetts, still afraid of the dark forces and still obsessed with the practice of fighting the devil and his servants. Everyone who has been different in puritan New England had a destiny of being targeted and punished. That was a real hunt on people who were not fitting into the codex of community. The religious terror if its own kind was an excuse for broken authority, failure of social consensus and absence of united identity of new colony. In that Salem was no place for the things that the simple minds could not have understood.

Everything started with the young girls who claimed that the local Parris’ Caribbean slave, Tituba bewitched them. We are talking here about 9-year-old Elizabeth (Betty) Parris and 11-year-old Abigail Williams (the daughter and niece of Samuel Parris, minister of Salem Village) that had symptoms of delusions, vomiting and muscle spasms. The mentioned girls suffered from the violent contortions and schizophrenic screaming so the communal doctor, William Griggs, diagnosed   bewitchment.  The Science magazine in 1976 published the study regarding the Salem outbreak of madness. The medicine explained all, the indicator of girls lunacy was fungus ergot, usually found in rye, wheat and cereals. The toxin was responsible for the wave of hysterical behavior and not the group of innocent older women. Unfortunately, the justice was too slow for the poor people that have been sacrificed as a scapegoat. Beside Tituba, Sarah Good and Sarah Osborn have been also considered as witches. All of them lived in the shadow of the community, fighting each day to survive hard life, far away from powerful witch elite they have been accused to belong to.

In one historical report, it is stated that the trial was very difficult:” The three accused witches were brought before the magistrates Jonathan Corwin and John Hathorne and questioned, even as their accusers appeared in the courtroom in a grand display of spasms, contortions, screaming and writhing. Though Good and Osborn denied their guilt, Tituba confessed. Likely seeking to save herself from certain conviction by acting as an informer, she claimed there were other witches acting alongside her in service of the devil against the Puritans. As hysteria spread through the community and beyond into the rest of Massachusetts, a number of others were accused, including Martha Corey and Rebecca Nurse–both regarded as upstanding members of church and community–and the four-year-old daughter of Sarah Good. Like Tituba, several accused ‘witches’ confessed and named still others, and the trials soon began to overwhelm the local justice system. In May 1692, the newly appointed governor of Massachusetts, William Phips, ordered the establishment of a special Court of Oyer (to hear) and Terminer (to decide) on witchcraft cases for Suffolk, Essex and Middlesex counties.”

The judge club, consisted of Hathorne, Samuel Sewall and William Stoughton made a decision to start punishing people for witchcraft. Bridget Bishop was hanged on the Gallows Hill in Salem Town and then the other people have been hanged, five more in July and five in August, but eight in September. The Devil did not save the witches from the unlimited human ignorance and the God did not save the common sense in that town. The egoistic and lunatic passions of Salem decided about the life and death, about blessings and sins. It is interesting to know that there was no legal base for this witch trial. Many of the trials have been decided before they have been processed and the victims have been chosen by the taste of public authorities. Who would ever think that the early courts have based their testimony on dreams and visions? Salem Witch trails confirmed the social importance of some people and the zero meaning of some others.

Later, Increase Mather, president of Harvard College and father of respected minister Cotton Mather, joined his son in the efforts to set up the regulations for witchcraft crimes and accusations and he stated:” It would better that ten suspected witches may escape than one innocent person be condemned.” That was a beginning of a counter fight for rights of people that are different. When Governor Phips dissolved the Court of Oyer and Terminer, the trials have been continued until early 1693 and the moment of releasing all those in prison on witchcraft charges by May Phips.  The process was so shameful that in 1697, the Massachusetts General Court announced the day of fasting for the suffering of the Salem witch trials. That was the obvious proof that the complete trials have been orchestrated, manipulated and without any rational and logical ground. Even the leading justice Samuel Sewall apologized for his role in this black process. Nobody could have erased the pain of the people who have lost someone in the brainless hunts. The damage was too big to be fixed by some public steps and official pretending that all was simply mistake.  All the memories have been buried with those who were imprinted with the letter of shame. The Colony tried to restore the good names of the punished people and to offer the financial restitution for the families of the condemned but the scream of the innocent is louder as the echo of passed centuries.

Nowadays, Salem is one peaceful town that has grounded its popularity on the black history of human suffering. Actually, the real, old Salem is Danvers, where the first trials actually started.  However, Salem does not give up on the beauty of witchcraft legends in spite of the fact that witch tourism is on decline, according to the latest reports. Why? Simply because people are tired of worshipping the suffering and celebrating the pain. The dark tourism is slowly losing its attraction, even for the eccentrics, artists or adventurists. Maybe the people of Salem are tired of being labeled through the book of witch trials. We can still find the interesting small shops on the Essex Street like Hex, Omen or The Coven’s Cottage, opened in the early 1970s.  If we visit some of them, we will breathe in the forbidden energy of wizardry.  The matters of spirit and soul are merged into the perfect harmony that gives to Salem a portrait of place that must be seen.

Behind the witch things, there is a wide range of amazing attributes of this town that is going to overcome its own dark tourism marketing with the cultural and literal strength. Forget the witches; embrace the new pulse of Salem, expressed in Maritime National Historic Site, Peabody Essex Museum, Jazz Festival and Heritage Days. If you are still into the haunting mood and mode for time traveling into the witch trails, at least give a chance to this town to be something else but not the place of the horrible executions of innocent people. Salem deserves that chance, the condemned finally deserve to rest in peace.

ACUTE FLACCID MYELITIS: WHAT IS BEHIND THE MYSTERY PARALYSIS OF AMERICAN CHILDREN?