THE FACTS AND THE MYTHS ABOUT THE DANGEROUS SAND

So many movies are very colorful in describing the horror of being trapped in the quicksand but without real touch of science. It is almost funny to imagine that there are places with quicksand that is able to eat up the one who has been caught in. This never-ending need of Hollywood to produce the stories based on fiction but presented as reality, have shaped the generations.   Now, we have the people who truly believe in killing capacity of quicksand and they are even not sure what the quicksand is and how it works. 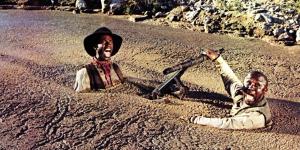 Science Writer for National Geographic News, Nicholas Bakalar has had the same problem to demystify the possibly deadly nature of quicksand, for the public. He researched a bit about it and admitted that is very hard to get out of it but it is not so evil to suck people to the death. The journal NATURE even explains the right process of being stuck in living sand, emphasizing that it is impossible for a person to be drawn completely under:” The fact is, humans float in the stuff. Researchers in the Netherlands and France studied quicksand, a combination of fine sand, clay, and salt water. At rest, quicksand thickens with time, but it remains very sensitive to small variations in stress. At higher stresses, quicksand liquefies very quickly and the higher the stress the more fluid it becomes. This causes a trapped body to sink when it starts to move. But a person moving around in quicksand will never go all the way under. The reason is that humans just aren’t dense enough. Quicksand has a density of about 2 grams per milliliter. But human density is only about 1 gram per milliliter. At that level of density, sinking in quicksand is impossible. You would descend about up to your waist, but you’d go no further.”

The realistic fear here is not being dead by drowning into the mass of sand but being blocked to get out of because of the flow resistance of the sand that increases. The structure of this quicksand is such that has a high level of viscosity and if we add to this the density problem, we will understand why is so difficult to make a single move.

What could help then to the one who is trapped into the sinister burrow full of sand? Water would definitely help as an element that could break down the sand sediment but also the force of the prisoner to make a progress. :”The authors estimate that the force needed for someone to pull their foot out of quicksand at a speed of a centimeter a second would be the equivalent of that required to lift a medium-size car.” 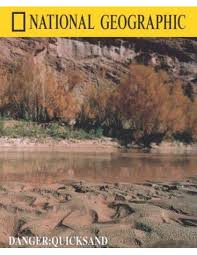 It is enough bad to know that our possibility to get out is dangerously limited and that we will sink in to the level of waist but experts recommend that we have to wriggle our legs all the time. At least, we should keep trying so the sand sediment could be somehow loosen by water circulation. The bad end of this case could be eventually sinking if we are in the quicksand by the sea and that we could die from the high tide. The fight with quicksand is not bad because no matter what, we cannot go so deep in the sand to die.

The people who are trapped in the quicksand die not from aggression of the sand but from the exhaustion and panic attack. The monster quicksand as it is oft illustrated in movies doesn’t exist in reality in spite of claims of people that they have seen it or even experienced it. The traditional quicksand is saturated soil, created by underground water. It could be found all over the world, but the most significant quicksand locations are found in the U.K, Libya and the U.S. The English ground is specially gifted with the quicksand and the off-road travelers over there should be careful in the area of Camber Sands in East Sussex, Seamill beach in North Ayrshire and Flookburgh in Cumbria. America has also the conditions for occurring of the quicksand: sand and rising water. The known area is around New Jersey, the coast of North Carolina and in Florida.

Bay Search and Rescue in England’s Morecambe Bay are skilled for rescuing people and animals from the notorious quicksand. They published a video tutorial about walking on quicksand without risk to be caught and trapped. The whole process seems like a dancing on the surface, but it is actually so-called wobbly effect or cow belly. It must be all the time without break, so the surface is not broken and the subject is not pulled down.

There were many situations of people being stuck in the quicksand and their panic reaction that has made things worse. They imagine their death as they have seen in the movies and forget to act rationally while they wait for help. This world does not recognize the devil sand sinkholes that are furious and fast in digesting the victim. All we have are locations with mixture of sand and water and exactly the ingredient of the water is our first helper. As long as we try to move, we have a chance to let the water disfigure the sand thick structure and to enable us the way out.

I do not deny the danger of the factual quicksand places but I believe that people should be informed and instructed how to behave in the certain moments of stress, quicksand challenge or risk. The tourist organizations should be obligated to offer updated maps of the quicksand zones as well as the rescuers that are positioned enough near to help to the targeted individuals.

Forget about the scary quicksand that crawls into your tired body and takes you out the last breath, learn about the real risks and defeat them. Our Planet is full of wonders that cannot wait to be discovered.

4 thoughts on “QUICKSAND –WHAT DOESN’T KILL YOU, MAKE YOU STRONGER”

THE AMISH CULTURE:HIDE AND SEEK

SELF-CANNIBALISM: THE OWN FLESH TASTES THE BEST