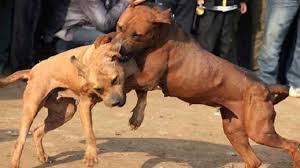 THE ULTIMATE CRY FOR HELP OF MAN’S BEST FRIEND 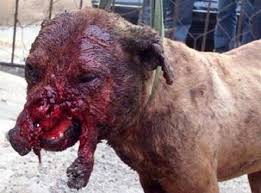 The dog’s purpose in our lives is to show us unconditional love, to save us from our own selfishness and to lead us towards light of our hearts. In million years from now, the dogs would always do the same for the humans, sacrifice for the love they feel.It is proved, there is no better friend than a dog. No matter if the dog  is small, big, good race or a stray one, every dog has the soul that can touch ours. Those dog that have been judged as dangerous or bad are those that are shaped by people with  black hearts. The creation or evolution has decided long time ago that dogs are and will be always the man’s best friend and guardians. Unfortunately, bad people betrayed not only the rules of the nature and God but dogs too. They turned dogs into the object for achieving money, they covered them with dust, pain and blood and valued them through the dollars. Bad people and the good dogs that have become bad one. 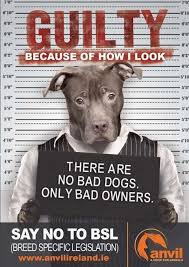 Dogfighting is one of the most condemned so called sports, and one of the illegal activity that keeps law enforcement always awaken. The dogfighting is considered as a felony offense in all 50 U.S. states but that doesn’t mean that underground web of those fights is erased. Many countries simply cannot identify the places and people that organize such a criminal event and that is something which breaks the total implementation of the law. When we take look on the history, the professional  fighting pits  started in 1750s and only developed through the years. According to the information of the American Society for the Prevention of Cruelty to Animals there are so many people involved in dog fighting in the U.S.:”Estimates based on fight reports in underground dog fighting publications, and on animals entering shelters bearing evidence of fighting, suggest that the number of people involved in dog fighting in the U.S. is in the tens of thousands. While organized dog fighting activity seemed to decline in the 1990s, many law enforcement and animal control officials feel that it has rebounded in recent years, with the Internet making it easier than ever for dog fighters to exchange information about animals and fights.” 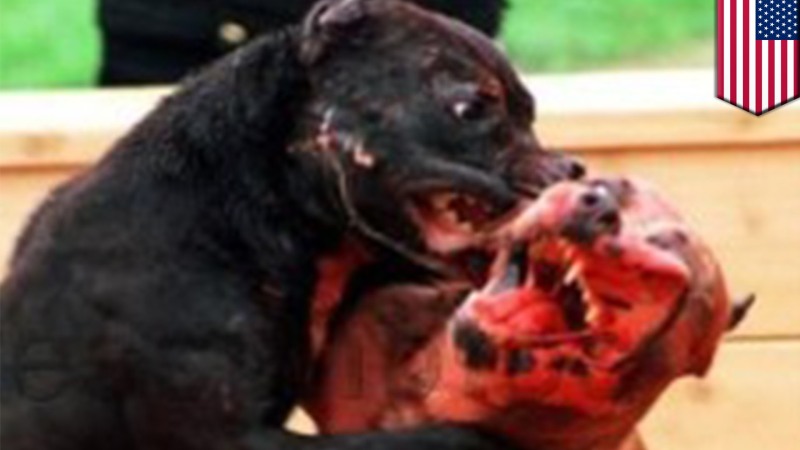 The Internet makes the dogfighting  to be easier  organized because the gamblers, spectators and organizers are forming the dark net of the internal communication and the sharing of information is faster than the counter crime actions of the police and law. The big amount of money that attracts all put the dog fighting among one of the most profitable criminal activities in the U.S. but also in the rest of the world. The above mentioned organization comes out with the data about the concrete prices for the fight:“Major dog fight raids have resulted in seizures of more than $500,000, and it is not unusual for $20,000 – $30,000 to change hands in a single fight. Stud fees and the sale of pups from promising bloodlines can also bring in thousands of dollars.”  This is not only about the money that circulates in the deaths of the defeated dogs and the glorious victory of the stronger one. It is one sadistic elitist approach to the status within the system of dogfighting. One who has a powerful dog will be the first one, the leader of the gang, alpha ruler of the disordered pack.  The owner does not want to lose so dog must be trained to fight till he doesn’t bring the points and money and death to the rival. Through the dog fights, the dogs are fighting one another but also that is the latent fight between the dog owners, the  potential ruler in the underground world of darkness. 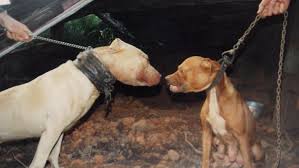 Based on some reports, there are those who even do not gamble or they do not actively participate in the dogfighting but they do not miss a chance to watch the fights. That population of brutal spectators should be also taken as a negative picture of the society because there is no any excuse for anyone to be involved in such a terrible and horrific amusement that deliver suffer and death to the innocent animals. 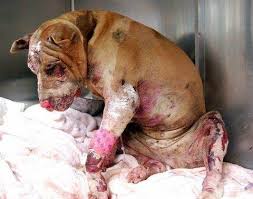 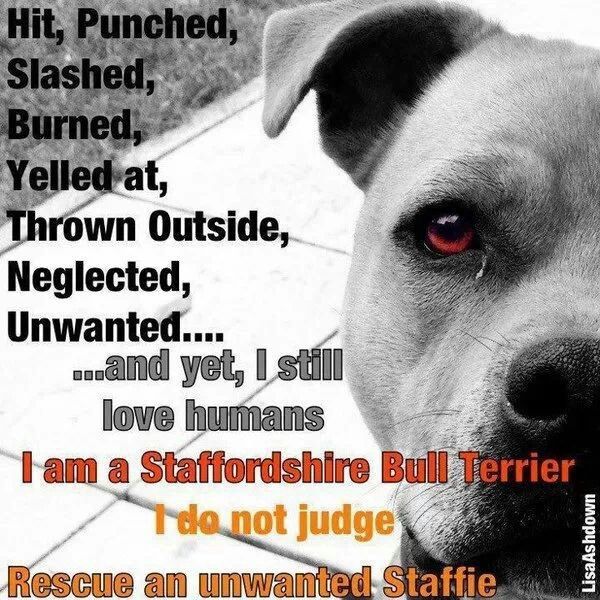 After they decided which puppy will be the one, they start with the torture. PETA brings the highlights of the real situations:“Typically, before their first birthdays, puppies bred for fighting are placed in front of other dogs in order to test their aggression. At around 15 months, two prospective ‘fighters’ are forced to participate in a ‘roll’—their first fight, which lasts about 10 minutes—followed by a second fight that lasts an hour. Survivors are chained again (sometimes with weighted logging chains) for a couple of months until they are ready for their first ‘show.”’Breeders ‘train’ dogs by forcing them to tread water in pools; run on a treadmill while a cat or another terrified animal, who may be someone’s stolen companion animal, is placed in a cage in front of the dog (to be caught and mauled to death as a reward afterward); and hang on with their jaws while dangling from a chain baited with meat.  The dogs are likely injected with steroids, and some breeders go so far as to sharpen their dogs’ teeth, cut off their ears (in order to prevent another dog from latching on), and add roach poison to their food so that their fur might taste bad to other dogs.” 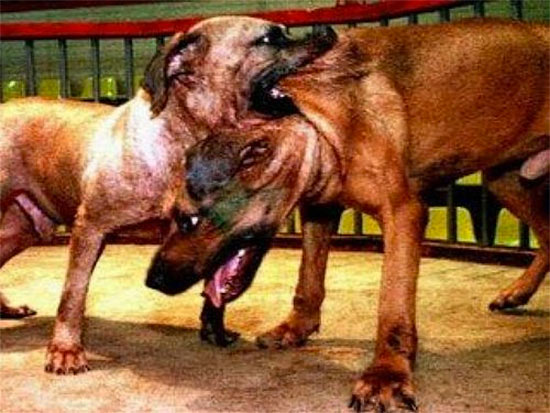 The terror that one dog experiences before he is on the performance is simply beyond imaginable. There are two categories of them: the dogs that put themselves as a perfect killing machines and satisfy the greed of their own trainers and owners and those that fail and they are misused as a bait animal. They will be killed soon or later. In this case, every dog will be killed, it depends on the money it brings to the owners. When  fails, it is the end. 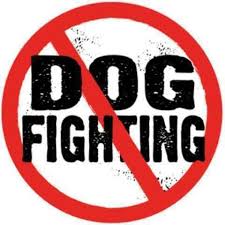 The organization of the fights mean absolutely secretive location and the distribution of the invitations and the participation of the spectators. They are all aware that what they do is a crime and they know the price of being discrete. Sometimes, they do not share the information with the family members , having a fear that they will be caught. Usually, the bloody theatre is hold in some abounded garage or building, when the dogs are released to fight on the command “Face your dogs” that turns them into the angry beasts. They can fight for hours or the battle could be done in less than one hour. It depends on the fighters and their injuries. One police officer confirmed that each dog has a gambling price and value. That means it is known what is the level of his resistance to the pain and his ability to keep fighting in spite of the hard wounds. He even said that the most horrific scene was to see dogs full covered in blood with almost all organs eaten. 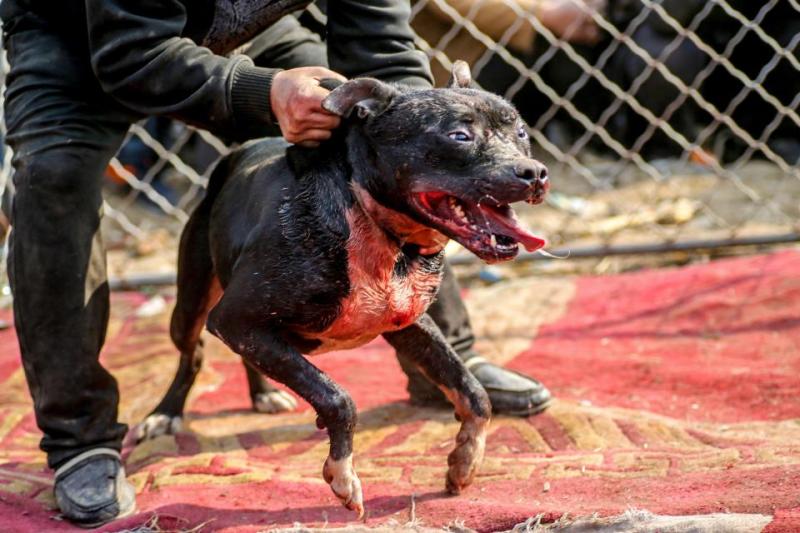 The mission of the law enforcement is to stop the criminal dogfighting but it couldn’t be done without the help of the ordinary people who can inform about the suspicious things that possibly are organized in the targeted neighborhood or house. That’s exactly how they discovered in 2007 the Michael Vick’s property in rural Virginia and discovered the infrastructure made for dogfighting.

The dogfighting is just an introduction into the severe criminal network. It leads usually to other fields of organized crime, like drugs and prostitution. The big players are usually the bosses in drug business too. The real ongoing is in Arizona and Texas with the underground dogfighting and criminal protection for the participators. When police breaks up the ring of the crimes, it goes directly to the core of illegal activities and evil events the gangs and mafia is organizing. 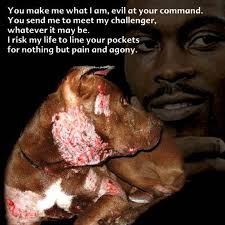 Federal law states that commerce import and export of fighting dogs is punished with three years in jail and  a $250,000 fine but the real question is how many of them are detected and processed?

The U.S. is not the only one in this horrendous activity. In Japan, for example, the dogfighting is something that the whole family is enjoying to watch to. Japan has bred fighting dogs for the last 400 years and all is connected and sponsored by the japanese mafia or yakuza. The fights are opened and there are small tournaments with up to 100 dogs and the big tournaments with more than 250 dogs. Unfortunately, only five of the country’s 47 prefectures have laws against dog fighting and Tokyo is the famous one, one that fights against dog fights as a criminal happening. 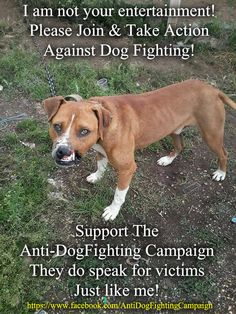 In Europe, the dogfighting is also considered as a severe criminal activity and this is the reason that is always covered by perfect mask of organized crime by Albanian, Italian or Russian mafia. The BBC undercover team has followed the traces in the UK and the rest of the Europe to identify the main points in Europe. The most disgusting fights are organized in Romania and Bulgaria but  in the UK the web of underground fights is also very strong and linked with the young problematic immigrants that have failed to integrate in anything but in the crime.

In the rest of the world, the dogfighting is also considered as an illegal event. In most of the civilized countries, it is banned. In Pakistan, it is practiced and allowed which is totally opposite to what Islam states and ban as a haaram.Those people who organize such fights could be not considered as believers of any religion but about typical cowards and cruel sadists with criminal interests. 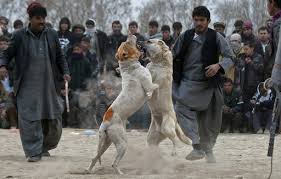 The dogfighting is a crime against animals and one step back for  humans themselves. It is deplorable and it must be stopped because there is no winners in dog fights. This dreadful activity brings chaos into the society and into our hearts as human beings. We let our greed kill our best friends and we do simply nothing to ban that barbaric and sadistic game. If we have just a bit of humanity, we will all stand up against those who color our world into the black. Dogs are here to be loved and not hatred, to be cherished and not abused, to save our lives and not to lose theirs. 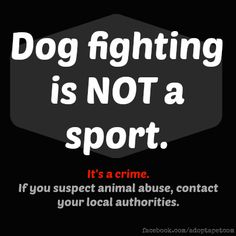 20 thoughts on “DOGFIGHTING: ABUSED DOGS FOR BLOODY AMUSEMENT OF PEOPLE”