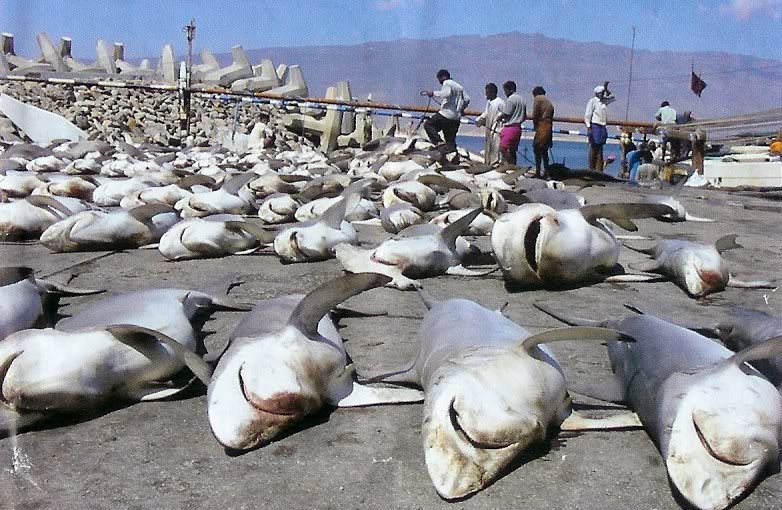 THE MASS SLAUGHTER OF SHARKS WORLDWIDE

HAS MADE IMBALANCE IN  THE OCEAN ECOSYSTEM

There are many interesting legends about the  sharks. In some of them, they are described as majestic, powerful creatures and in some they are symbols of fear and darkness. The Fiji Islands have their own Shark God known as Dakuwaqa – The Fierce Sea God which is protecting the whole Island wildlife.Then, the beautiful story from the Big Island of Hawaii, about the  Kamohoalii, the king of all sharks which was shape-shifter and who felt in love with stunning local woman Kalei and they got son Nanaue. The king had to go back to water but he insisted that his wife promise him that she will never let their son to eat any animal. Unfortunately, as Nanaue grows, his appetite became bigger and bigger and once he tried animal meat, he turned into young  vital shark with power to change shapes as his father. He didnt make up to control his hunger so  people found him in his shark form and killed him to protect their children.Sharks are the part of many cultures and mythologies, from the Australian Aboriginal people and Indonesian Tribes to the Indians of North America. Some aspects of shark tales are found in Greek mythology too. 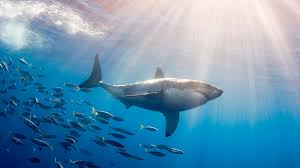 No matter if we use positive or negative focus when we analyze sharks, we must agree about the simple fact that these animals are very impressive and that their role in global ecosystem is bigger than we suppose. According to the organization SHARK SAVERS, sharks are at the top of the food chain so they keep fish population very healthy and also productive:” Sharks have evolved in a tight inter-dependency with their ecosystem. They tend to eat very efficiently, going after the old, sick, or slower fish in a population that they prey upon, keeping that population healthier. Sharks groom many populations of marine life to the right size so that those prey species don’t cause harm to the ecosystem by becoming too populous. The ocean ecosystem is made up of very intricate food webs.  Sharks are at the top of these webs and are considered by scientists to be ‘keystone’ species, meaning that removing them causes the whole structure to collapse.  For this reason, the prospect of a food chain minus its apex predators may mean the end of the line for many more species. ”  Their role is a kind of corrective since they are controlling the ecological balance and the other species and their habits as well. It is said by all marine biologists that sharks are  the most important indicators of the healthy ocean. The top ocean predators are forming the behavior of other species in the ocean food chain and they stop any deformity in the chain to progress or one life form to absorb another one or to destroy the natural habitat beside the allowed space. The ruin of the ocean is visible in those parts where sharks are extinct. 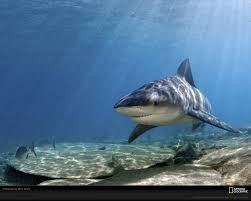 The ties between the nature and the sharks were unbreakable for the last 450 million years but unfortunately there are signs that those mysterious and ancient animals may be gone within the next decades. The reason for it could be found in growing greed among people, in the rise of wildlife terrorism and wildlife crime which try to permanently destroy our Planet. 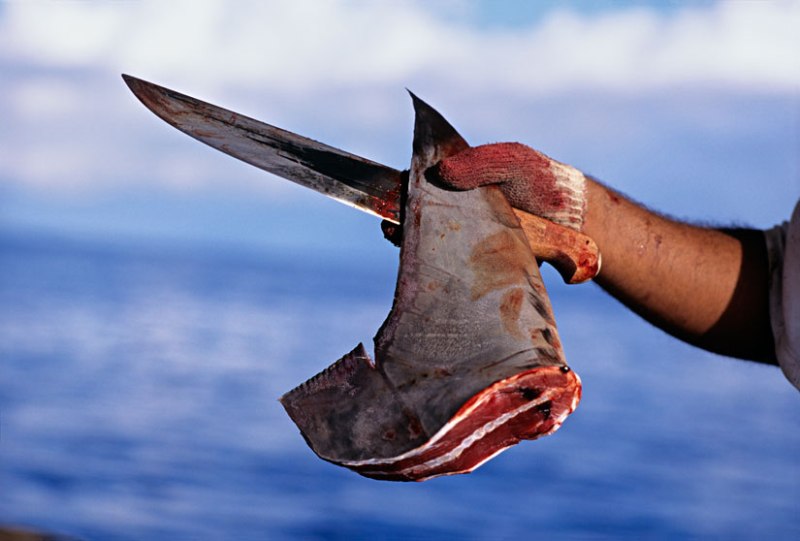 The slaughtering of sharks is happening for years back. Why? Because of shark fins:“Every year tens of millions of sharks die a slow death because of finning. Finning is the inhumane practice of hacking off the shark’s fins and throwing its still living body back into the sea. The sharks either starve to death, are eaten alive by other fish, or drown (if they are not in constant movement their gills cannot extract oxygen from the water). Shark fins are being ‘harvested’ in ever greater numbers to feed the growing demand for shark fin soup, an Asian ‘delicacy’ “. This report comes directly from the organization Stop Shark Finning, what is giving amazing efforts to stop thin barbaric trend and to raise an awareness of people what does it mean losing sharks. Not to mention that some of the shark species have been decimated by over 95% and there are many of those who are vanished but still there are no data from the field. The problem is still with the markets which are interested in import of shark fins, and among them are leading Hong Kong and China. It seems that whenever we start digging about the problem of animal cruelty and animal slaughtering, we come to the point to discover China or some other “civilized” Asian country. This tells us more than we even need to know about that country and that society. The home land of Yulin Dog Meat Festival and Tiger bone wine is definitely interested in slaughtering thousands of sharks for the purpose of delicious fins.  This is not only shame of China, Indonesia is sharing this bloody trend too. Indonesia  is the world’s largest shark catcher so it is available to export shark fins to China, Hong Kong,Taiwan and Singapore.This country produces at least 486 tons of dried shark fins a year based on Green Peace Indonesia reports.The horror killing of sharks happens  in Indramayu, in Indonesia’s West Java Province. 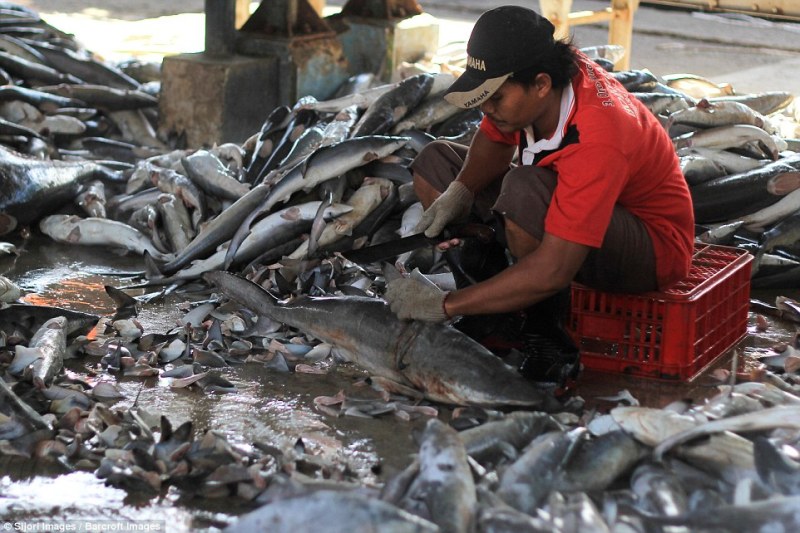 What is so special about shark fin soup beside its price  £68 per bowl? The Stop Shark Finning organization states the following:“Demand for shark fin soup has rocketed in recent years due to the increased prosperity of China and other countries in the Far East. Shark fin soup, which can easily cost $100 a bowl, is often served at wedding celebrations so that the hosts can impress their guests with their affluence. Because there is such a high demand for shark fins, traders can make a lot of money from shark fin, but it is the restaurant owners who really “make a killing” in this foul trade.Fishermen are only interested in the fins because shark meat is of low economical value and takes up too much space in the hold. It also contains urea, which turns to ammonia once the shark has died and contaminates other fish.Shark fin itself is tasteless, it just provides a gelatinous bulk for the soup which is flavoured with chicken or other stock. Many people, especially the consumers, are unaware of the sufferring that finning causes.”

The National Geographic warns that every year are killed about 100 million sharks. Because we need sharks, the statistic allows us, considering the 63 shark species, that we can kill only 4,9% of sharks each year to keep their population stability. This is not accepted by many countries which are getting deeper into the hell of illegal trade.

What we could do to save  these ocean guardians?

Sign the petition and then inform people how much the sharks are essential for our global bio system. As long as people are convicted that sharks are furious, hateful predators they will witness their extinction and the destruction of the ocean wildlife and balance.

We are all residents of this Planet and each of the species has its own purpose.  People are the biggest predators and they are supposed to protect the other species in the food chain but as it looks now, they failed to do that.

In this case, people’s teeth defeated shark’s jaws and soon we will have only memory of one Shark God, once upon a time.

THE EXTINCTION OF THE BEES :THE WORLD AFTER THEM?