SLAUGHTERED ANIMALS AS A REMINDER OF FAILED HUMANITY

Every new day is a chance for the mankind to become better or to give up totally on human values and to embrace savagery. It is so obvious that no matter how much  we are advanced as civilization, our blood is still infected with paganism. Unfortunately,primitive people are usually aggressive as  those who are intelligent are silent,  so the world is silently  losing a battle against backwards.

When we reveal the stories about religions, traditions and cultures we must isolate ourselves and our own preferences from the object of observation. That is the only way to be informed and to escape the trap of being opinionated in writing pro or against. I am trying to follow that golden rule but recently but  I faced up with so many cruelty in some  aspects of certain religions and communities. I think we come out to the end of anything which should  have ever  been considered as humanity and that we  had opened gate of the moral hell long time ago.

This time, I will show you the road to the  mysteries of  former Soviet republic of  Georgia, called by Georgians as Sakartvelo. During the Middle Ages, Christian crusaders traveled through this region which has been the part of the Persian Empire and settled by people known as Gurj. Christian warriors saw how many Gurj are devoted to St. George and the name was created very spontaneously.  Georgia and Georgians. The home land of Joseph Stalin, the Caucasus Mountains and the booming Orthodox Church

The fact that the current Orthodox  Christianity   is very dominant element in Georgian society doesn’t explain us why some of the ancient barbaric religious  customs are still acceptable and promoted. This is not only about religion  but about the specific form of violence which directly hits the other living creatures. As always, animals experience the worst  part of “human celebrations” – they are sacrificed for nothing, with no mercy. Lomisoba is Georgian face of shame. 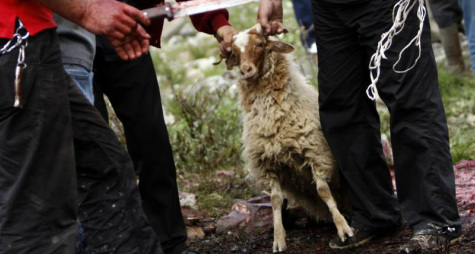 The whole story about the Lomisoba festival is shaped by one legend. Actually, there are two versions of one legend. According to one, the Lomisa church got its name based on Bull Loma, who found the way home with the St. George Icon and who saved Mtiulians, highlanders from the White Aragvi Ravine region from the Persian captivity:“The church dates back in the 9th-10th century.  It is safe location for travel even though is located on top of the range which divides Ksani and Aragvi River gorges and that range serves as an administrative border between the separatist region of South Ossetia and the rest of Georgia. According to an old legend the door of the church is on the Ksani River side, now on the South Ossetian side of the ABL, and the key to the door on the Aragvi River side, now on Tbilisi Administered Territory. It is said that the Lomisoba festival cannot be started unless there are people from both sides participating. Therefore the tradition of the Lomisoba festival has continued unaffected since the 2008 conflict.There is the assumption that the church initially was the pagan shrine dedicated to the moon deity, on the place of which the Christian church was built later.” The second myth is also very interesting because it is connected with the historical clashes and resistance:”There is another legend connected with Lomisa, according to which in the 13th century, when the Khwarazmid army headed by Jalal-Ed-Din invaded the country, 7000 inhabitants of Aragvi gorge were taken hostage. The captured took the icon of St. George with them. According the legend the icon brought the drought to the Khwarazmid country. The frustrated sultan asked for magicians, which said that the reason for this disaster was the icon brought from Georgia. First Sultan ordered the icon to be burnt; however, it flew out of the fire, placed of the horns of the white bull. The bull with the icon did not move, until the last host was set free.  So, the 7000 Georgians started to move back to their homeland. In every place they stopped they have built the niche-shrine. Finally after the long way, the icon settled on the Mountain in Mleta, where the Lomisa church stands now. Later this place has been piligrimised by the daughter of noble Dadiani, which brought the huge heavy chain with her shoulders up to the church. Another story tells that St. George has miraculously saved one of Georgian hostages and as a sign of his appreciation the saved one has devoted the chain to the Lomisa Church. This huge chain is still found in the church and everybody can put it on the neck and make a wish.”

Not any of those flashes from the rich Georgian heritage doesn’t give us an answer why The Lomisoba festival is a terrible failure of humanity and humans towards domestic animals? Behind the romantic epic telling about St. George and his pilgrims there is tragic scream of hundreds of slaughtered sheep for the sake of belief. The festival is held on the 7th week following the Easter. Many people walk up to mountain,wearing 8 kg weigh chain on their necks hoping that St. George will hear their wishes. The symbolic meaning of chain is understandable having in mind the origins of this custom. However,  the cruel massacre of sheep is definitely not understandable and it is even banned by Georgian orthodox church but shameful practice is widely spread among some  people and especially in some regions more than in others. Sacrificing sheep and other domestic animals with no reason, they believe that St. George will hear their prayers and help them and their families. This has nothing to do with an official religion but with medieval pagan faith. 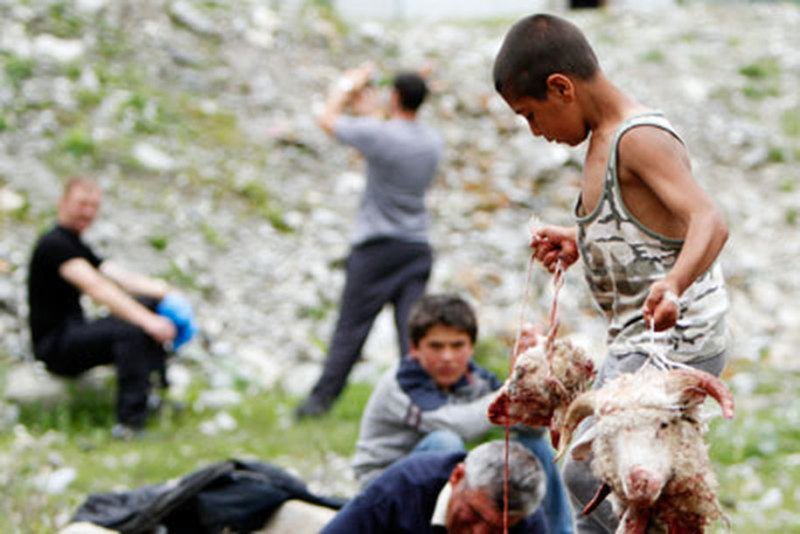 One journalist from GEORGIAN JOURNAL was following the festival and he wrote he was terrified about the high level of savagery into one christian community. In the front of the controversial church is   something like butchery, people are killing and slathering the sheep, boiling them in giant pots and expecting the feast after they asked St. George for help. There are people who have sick family members and they will do anything they are able to help them even if that means mindless sacrifice in cruel way of animals. This should be condemned  because the model of sacrifice of  living creatures in 21st century takes us back to the dark ages. The bloody field around the Lomisa Church is welcoming the children too. Now, imagine what those children are teaching from this or any similar festival. They are taught to believe in pagan things, they are taught to deny any compassion and empathy and they are taught that sadism is important ingredient of community. Not only that, this kind of manifestation shouldnt be promoted as a tourist attraction because it is slap in the face of civilization and its values. This should be highly condemned and urged to be stopped since the official Georgian Church bans this, the government must work on this issue too. 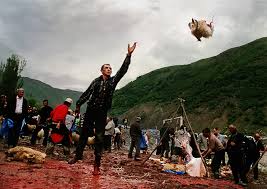 The terrorism of the mankind towards animals and nature becomes the reality and will remain the reality as long as indifferent people close their eyes in the front of those who cant speak for themselves. One day, maybe they will be those who will be sacrificed for the sake of some imagined God in the age of space exploration.One day, none will hear them.

I hope that we can fix this Planet because it belongs to all living creatures not only to the predators among them, to human beings.It is never late to be human and not only human being.Act. Follow the link and sign the petition: 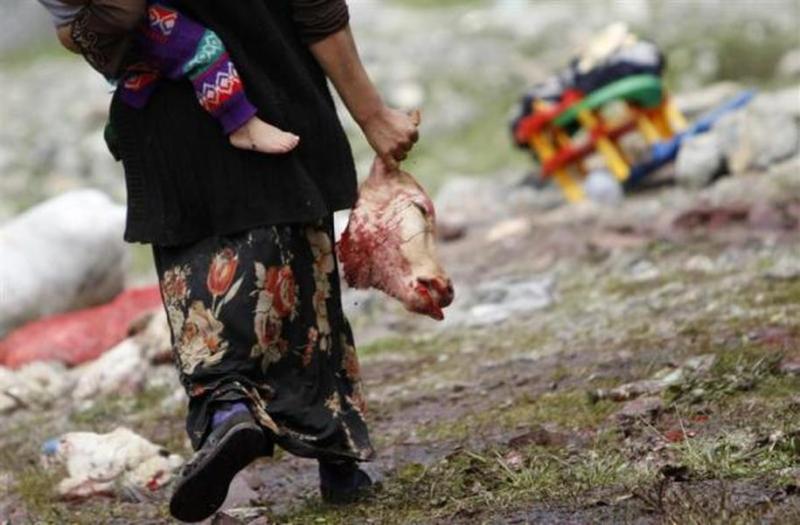 Everyone can help someone. All lives matter.

THE AGHORI MONKS OF VARANASI: EXILED CANNIBALS AMONG DEAD