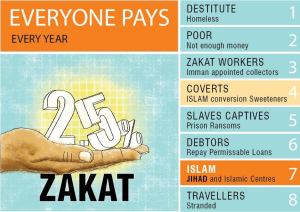 In the age of Islamic terrorism rise, there are so many information as well as misinformation about Islam and its agenda. It is nothing new ad it always follows any propaganda in any kind of conflict. The difference between tabloid reporting, full of scandals and blood and investigative reporting is in quality of informing people, because  the truth must be an absolute priority.

I was intrigued with the halal boycott campaign, so I started researching what is behind it, if anything is. Then I came to the strong  ties between halal and zakat and possibility that zakat could finance Islamic  terrorism, under the cover of religious obligations.

What I am talking about here?

Zakat (زكاة) is a specific term used in Islamic finance vocabulary which present the obligatory for every Muslim individual to donate  certain amount of money, based on annual wealth, to charitable causes. This is not only the financial mandatory but also a religious, what refers that Muslims who give this zakat are pure in their economical lives and that they are ready to help those who don’t have or who are financially endangered. The mentioned religious rule is a third one of five important  pillars of Islam by itself and if we analyze this obligation, we can conclude that there is nothing wrong about it. People for people. Those who have for those who don’t have. The certain proportion is expressed in the following percent: 2,5 % of one year’s total cumulative wealth. Prophet Mohammad (PBUH) has said “Whoever pays the zakat on his wealth will have its evil removed from him” (Ibn Khuzaimah and at-Tabaraani). This picture is a typical religious picture of solidarity and mercy for poor people and those who need help. Unfortunately, not only for them. There are also other categories of Muslim Ummah ( Muslim population) who also take this money and use it in not so much religious ways.

As-Sadaqât (here it means Zakât) are only for the Fuqarâ’ (poor), and Al-Masâkin (the poor) and those employed to collect (the funds); and for to attract the hearts of those who have been inclined (towards Islâm); and to free the captives; and for those in debt; and for Allâh’s Cause , and for the wayfarer (a traveller who is cut off from everything); a duty imposed by Allâh. And Allâh is All-Knower, All-Wise.( Al-Tawba 9:60)

So, that means that zakat must be used for the following purposes :

1.  Fuqarâ– poor people who don’t have but they do not beg and ask for help;

2. Al-Masâkin – poor people who don’t have but they do beg and ask for help;

3. Amil’ Zakah – those who organize the collection and distribution  of zakat

5.Riqab – for Muslim slaves whose freedom need to be purchased

6. Fi sabi `Lillah – those who are fighting for the Allah’s name and in the cause of Allah ( this point is very interesting to us because it includes the jihad strategies and jihad soldiers: the Mujahideen)

7. Ibn as’Sabil – Muslim traveler who need help on his travel

Normally, we are most interested in the section 6, because that refers to those who are fighting for Allah, in holy wars and against infidels. Fi sabi Lillah – those in the path of God. Even in the Islamic history, jihad  was always the primal goal :”Narrated Abu Huraira: Allah’s Apostle (p.b.u.h) ordered (a person) to collect Zakat, and that person returned and told him that Ibn Jamil, Khalid bin Al-Walid, and Abbas bin ‘Abdul Muttalib had refused to give Zakat.” The Prophet said, “What made Ibn Jamll refuse to give Zakat though he was a poor man, and was made wealthy by Allah and His Apostle? But you are unfair in asking Zakat from Khalid as he is keeping his armor for Allah’s Cause (for Jihad). As for Abbas bin ‘Abdul Muttalib, he is the uncle of Allah’s Apostle (p.b.u.h) and Zakat is compulsory on him and he should pay it double.” Sahih Al-Bukhari, Obligatory Charity Tax (Zakat), Volume 2, Book 24, Number 547

If we understand that mujahideen are Allah’s soldiers, we would come to the conclusion that one but big portion of ZAKAT money definitely goes to them, who are located in many militant groups  with Islamic terrorism schedule. 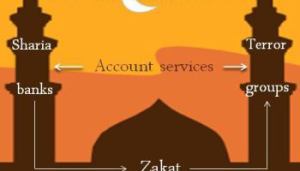 I believe there are soft and hard battles for Allah Sake. Soft are those who are lead in cultural and diplomatic fields and the hard battles are emanated in jihad. Both are equally important to Muslims and for both of them, money is given.

The terrorism abuse of zakat is very old and Daniel Benjamin and Steven Simon wrote in The  New York Times about it: “Terrorist groups rely on contributions from wealthy religious conservatives in the Persian Gulf as well as from money diverted from the zakat — the mosque collection plate — on several continents. Money is often funneled through reputable charities into the hands of operatives. For instance, the World Trade Center bombing was financed through money coming from the Alkifah Refugee Center in Brooklyn. And the system of funneling money through charities has improved greatly since then.”

Zakat is also paid through the halal food. How? Halal in Arabic language means that something is permissible, and in this case it is  referring to food. According to Muslim religious rules, there is a process which must be respected and followed regarding the meat and only Islamic organization must approve such a kind of food. The opposite of it is haram, something which is not permissible, which is not based on religious purity. One website about halal food and its relations to the terrorism writes the following:“Halal certification is done on a fee for service basis, with the fees varying with the scope and scale of the services.
Certification is provided by Islamic organizations, and would not be halal if the required zakat was not paid on the fees.What you may not know is that there are eight classes of zakat recipients, each of which gets a 1/8 share of the gross.
One of those classifications is fighters in Allah’s cause aka Mudihideen, aka terrorists.
When you purchase a product which is certified Halal, you are indirectly contributing to terrorism.” This conclusion should be taken very roughly because there are many other excuses for halal-zakat-Islamic terrorism trilogy. For example, intelligence service in the USA knows that more than 27 Muslim charitable organization are participating indirectly in funding Islamic terrorism, through the Islamic centers and other channels. It is also the fact that many Muslims are unaware that their donations don’t go always or not necessarily all of them go for good purposes but also for bad.  Money Jihad is something which links Islamic taxation and Islamic terrorism financing . The religion managers and wild imams who usually participate in this kind of ” high finance distribution” know that there is no believer who would ever reject to fulfill the third obligation of Islam, to pay zakat.To buy halal. To indirectly help financing the jihad somewhere far away. So, that means that money jihad is always assured and safe. It is always a  certain source of financing the war strategies. 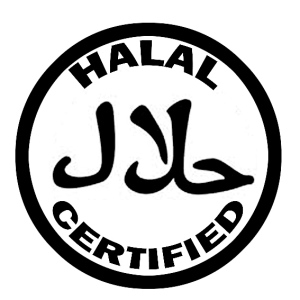 The campaigns in the  western countries, especially in the UK and Australia, were very strict against halal certification. The master minds of those anti-halal propaganda and BOYCOTT HALAL ideas come up with the facts that  money we pay for some halal product is a money which  will for sure somehow be delivered to those who want to fight against us.

The activists who started this campaign against so called Stealth Jihad and soft introducing of Sharia’ah Law into our societies believe that there is a wider range of this halal methods. Halal is everywhere and it could be found in everything. Invisible oil money from rich Arabic  countries bring also the influence on economical and cultural diversity in non-Muslim countries and that is like a Domino effect. It starts with food and it is finished with the street fashion. Suddenly, we have halal, burqa and Shari’ah Law in our neighborhood. 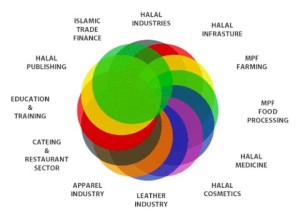 I don’t suggest that we should ban halal industry in our lands, not at all.We only need to control the influence of it and to not allow that our national and religious  security is replaced with masked Shari’ah Law.

The Muslims who pay zakat follow their religious rules. What is behind it and how that money is misused should be  a task for  our security services. In the meantime, we should follow our way of life  and not allow HALAL rules to become rules for us.

THE FOUR JIHADS - ENOUGH FOR ALL INFIDELS