I simply love Canada because it is like a fairytale land in the world full of fake values and hatred among people. The Canadians are friendly, happy and surrounded with beautiful nature, amazing wildlife and untouched wilderness. Canada has it all what we need. However, there are some Canadian provinces that are miracles themselves, being known as unique and authentic. One of them is definitely Saskatchewan, the land of mesmerising sunsets, playful summer storms and cold winters. If you haven’t been there, it’s time to pack and to go. It is calling you for an amazing adventure and you wont regret.

What we should know about this western province, bordered by Alberta on the west, by the Northwest Territories on the north, on the east by Manitoba and on the south by the US states of Montana and North Dakota? It is an agricultural superpower of Canada, with 651,900 square kilometers (251,700 square miles) and about 1.2 million people, known to be the friendliest Canadians ever. This land is blessed with fresh water so doesn’t surprise the significant number of rivers and lakes. It is estimated about 100,000 lakes only in Saskatchewan, 2 national parks and 40 provincial parks.

The Canadian wonder has been discovered in 1690 by Europeans and settled in 1774 but the land itself has been inhabited with original people of North America, the tribes of Sarcee, Niitsitapi, Atsina, Lakota and Sioux. The sun adores Saskatchewan since this is the Canadian province with the longest sunny hours in the year which helps good agriculture and enhanced export, which contributes to the federal economy either.  Beside it, we shouldn’t forget the sylvite or potash, the official mineral of the land that will last even hundreds of year more, at current rate of production. 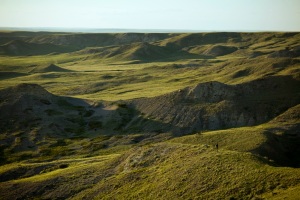 I find thrilling that this Canadian province has a perfect balance between urban city life and peaceful nature. If you live there, it may be that you are annoyed with something  but also very proud of the land that has simply all you need for your soul harmony.  If you are just a visitor, you may be interested to start with Cypress Hills Interprovincial Park that is some good mixture of grassland, wetland and deep forests. The next step could be enjoying the active dune fields in Canada, so called the Athabasca sand dunes, about 100 kilometres along the south coast of the lake Athabasca. There is one interesting legend about it:”According to Dene legend, the dunes were created when a giant man speared a giant beaver that thrashed its powerful tail around so much in the throes of death that it ground the surrounding soil into sand.”

Now, let’s think  about 26,000 kilometres of highway and the road surface of 160,000 kilometres that  put Saskatchewan on the first place in Canada, as the province with the best infrastructure. But, this is not the only thing that we need to know. There is is mustard production and pulse crops that go to the whole world, directly from this province hidden among the forests, prairies and lakes.  With the perfect Massold Clay Canyon and its own Dead Sea, common known as the saltwater lake of Little Manitou, this unique land has everything for starting a Canadian unforgettable holiday.

There is also something mystical about Saskatchewan that is usually linked with the popular urban legends about UFO being seen around, Bigfoot stalked the locals and ghosts who are lurking people on the lonely highways. What is the truth behind? American Bigfoot is known as Sasquatch in Canada and some Canadians claim they have seen him. It is only an urban myth that has nothing to do with reality but people like making stories and some earn money on them. Every country has its own Sasquatch but why we always think that Sasquatch has been born in Saskatchewan?  The words itself means the primate or hairy  human like creature but  Saskatchewan got its name from the Cree word for swift-flowing river or Saskatchewan River.  Those two aren’t really connected, except that some Saskatchewans believe they have seen Sasquatch although there is still zero physical proof of its existence.

Saskatchewans love playing hockey and curling and they have given some of the best Canadian athletes but this province is also great in gastronomy, especially if you like to test the different tastes in Saskatoon. I recommend Ayden Kitchen&Bar, the restaurant of Chef Dale McKay, winner of the first season of Top Chef Canada. There is also one Mexican restaurant Las Palapas  that is very popular for its food. Regina, the capital city,  on the other side, offers La Bodega, where you will find excellent tapas bar and grill. The  Bushwakker Brewpub is one of the best Canadian brewpubs and place that has to be visited and experienced. 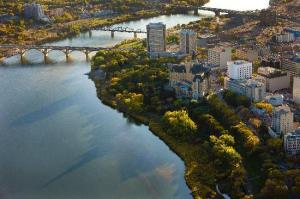 Many immigrants love to go and settle in this flat land, very famous for fast growing economy, lots of job opportunities and favourable and friendly government. The people over there are easy going, opened and hospitality is on every single  step.  It is a fantastic collage of indigenous people and new arrivals, the historical book of ethnicity coloured with balanced immigration policy. You find it all her and everything is with style. There is no political pressure or religious tensions but the provincial original spirit grown on the local and exported values. That is mostly seen in the delicious cuisine that presents the recipes from the new comers merged with the native touch. Saskatchewan is an unique place to be, to live or to visit. If you visit, you will stay forever, dreaming about capturing Sasquatch, seeing UFO flying above your home and hoping that you will learn ice hockey and enjoy curling. This land is not just a tourist destination but a way of life, fulfilled with tranquility, positive mood and hope for a bright future we all deserve.

3 thoughts on “SASKATCHEWAN: THE LAND OF LIVING SKIES”

THE AUSTRALIAN SAGA OF SADNESS: FIRE, PAIN AND DEATH

THE CROSS-SPECIES SPILLOVER: FROM WUHAN EPIDEMICS TO GLOBAL OUTBREAKS