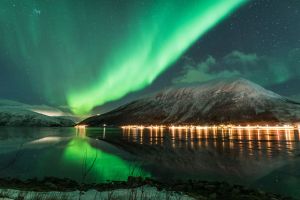 “When I look at the northern lights … I see our ancestors dancing around a sacred fire, lighting the way for us when it’s time for us to cross over from this physical world and join them.”

The one winter night and the thousand feelings about the home I need to find again.  Somehow, I lost it the way back, to my primordial soul and found myself stuck in dimension that I will never understand. I am the daughter of the north and nothing and none can change that. Long time ago, I used to set up the sacred fire and to welcome the first fresh breeze, hoping that winter wont be hard and that the wolves wont howl the whole season. I used to be free dancer of the nature, now I am dreamer that can’t escape the sticky town, brainless crowd and world without compassion.

Have you ever  seen the epic  Northern Lights ? Do you want to see it? I believe you do as majority of globe wanderers that hope to catch up legendary Aurora Borealis. It is more than a travel goal, it is life experience itself. If we just read all the tales about this enigmatic sight, we are even more sure that those fascinating Northern Lights, visible only near to the poles, must be seen and must be taken into the heart as the timeless beauty of the Earth.  Back in the history of mankind,  Aurora Borealis has been accepted as a pure miracle and there have been created many stories about its origin and purpose. The science and the progress of the civilisation has offered the logical explanation that is still less thrilling as numerous sagas about the queen of The North :“Electrons from the sun interact with the gas particles in the atmosphere, and the reaction produces light. When magnetic fields on the sun get twisted together, they create sunspots, and particles escaping from these sunspot regions create something called solar wind. After traveling 93 million miles to our planet, the solar wind is lured by the magnetic North and South Poles. The varying colors are caused by different gases in the earth’s atmosphere.A shade of greenish-yellow, the most common color visible during one of these light shows, is caused by solar particles colliding with oxygen in lower altitudes—up to 150 miles above the earth. A collision with oxygen at very high altitudes, over 180 miles above the earth, produces much rarer shades of red. A pinkish-red at the lower edges of the sheets of light is common, created by collisions with nitrogen particles. According to Hampton, a purplish glow is also seen when solar particles get charged by nitrogen at sunset. 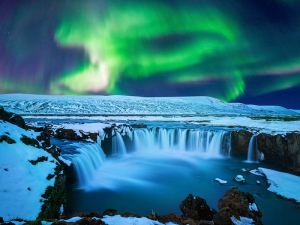 This scientific background fades away when we open the book of legends all over the world, that moved and inspired people to chase Aurora Borealis. Every culture has given its own contribution to the Northern Lights portray through the centuries of human evolution and mind revolution. The Eskimo groups in North America believe that Aurora Borealis is a playground of all spirits. The Sami people, for example, have a fear from Northern Light and stay inside when the show is happening since they believe that angry spirits will come down to the Earth and take some soul.

The Mandan tribe in North Dakota claim that the Northern Lights were evidence of non-human beings, the giants that need light when they are fishing at night. The Fins believe in one mystical fox that brigs sparkles into the sky with its tail. In Russia, people like to think about Auroras as about fire dragons that come down to seduce women whose husbands were absent.  In the nordic mythology,  it was told that is a bridge between Earth and Asgard, home of the gods. Not all communities believe in glorious side of Aurora Borealis. The Inuit people in Northeast Canada are sure that the Northern Lights are caused by demons that carry lanterns. Those demons are hunting lost souls and lurk on them.  The complete global mythology is based on different cultural approach to the phenomena of Aurora Borealis and the sign that the people, no matter how similar could be, share often the opposite ideas about the origin of some situation or manifestation. The some groups understand the show through the positive and hopeful prism and some groups see this through the shadow of fear from the unknown.

Do you know how the Northern Lights have gotten this wonderful name,  Aurora Borealis ? The brilliant astronomer, Galileo Galilei, back in 1616, created this name because of the similarity of Lights  with  the legends of antic goddess of the dawn and north wind. I find this name simply amazing and I promised myself that if I ever have a daughter, she will be Aurora. The symbol of new start, cold and promising north that will save the dying world.  The Northern Lights could be seen in the Southern Hemisphere but then it is the spectacle known as Aurora Australis.  Nevertheless, the most beautiful and most breathtaking light performance could be seen in the remote locations, in deep moonless winter night and the travel experts recommended almost 13 places that will let you see the Aurora Borealis in its best. On the first place is, of course, Alaska and Fairbanks, located directly under the Aurora Oval and if it happen you are there, be sure it is in the Aurora season, from  August 21 and April 21. The second but not less exciting is Tromsø, the norvegian version of wild far away north. Finland has to offer Lapland adventure for almost 200 nights in a year.  Sweden,  Island and Greenland  are also accepted as tourist options for Aurora Borealis time. I was surprised to see the Scotland on the list with Orkney.  The Europe has its own way of dancing with Northern lights but Canada has Yellowknife, the capital of Canada’s Northwest Territories. In other words, this town is famous as Aurora capital of North America and from January to March, you can experience the playful and tempting Northern Lights. For Americans, there is another top choice for chasing the sky light dance – it is enough to drive to the Michigan, in Upper Peninsula.  There are many possibilities to catch the alluring Aurora Borealis and to encounter its glowing in dark and cold northern nights. It is one of a kind occurrence and it teaches us about the vulnerability and sensibility of our beloved Planet, it is like its own make up, the fest of its own divine charm. 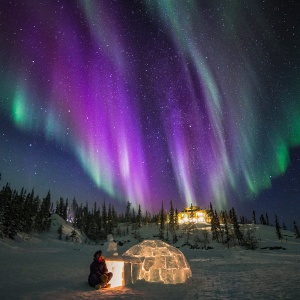 Next time you are there and you feel the eternity through the Northern lights, think also about the need to save our Planet and its beauty, before it is turned into the ash of mankind greed and forgotten as the Philadelphia experiment that has once succeed and then finally failed for all times.

2 thoughts on “AURORA BOREALIS: THE SPARKLES THAT LIVE FOREVER”

THE GRIZZLY BEAR: THE SYMBOL OF CANADIAN WILDERNESS

THE JOY OF DECEMBER: THE CHRISTMAS AND ITS WONDERS