THE GODS OF OUR DREAMS 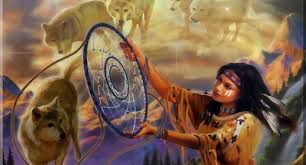 “In dreams we enter the world that is entirely our own”

It is very well known that the world of our dreams is full of secrets and unknown facts. The science is facing with the great challenge to conquer the mysterious nature of the world of dreams and to offer the digesting explanations for the parallel universe of our brain. On the other side, the spiritual people are giving all efforts to get into the hidden zones of our souls and to light up the darkest corners. Somewhere in the middle of nowhere, we meet up with our own thoughts, hopes and fears and turn them into our mesmerizing dreams or into the scariest nightmares.

Once upon a time, Native American tribes. The Ojibwe and Lakota people, discovered the meaning of dreams and the way to protect them from the evil forces. It is written that Lakota spiritual leader had been on the mountains for his meditation and that he had a vision about the teacher of wisdom, Iktomi presented in the form of spider. He had the willow hoop with feathers, horse hair and beads and he had started to spin a web, symbolizing the words into his maestro net that should be understood as the cycle of life, from the early to the old ages that each of us travel through. According to the experts for Native American’s history, the ancient teacher said:”…in each time of life there are many forces – some good and some bad. If you listen to the good forces, they will steer you in the right direction. But, if you listen to the bad forces, they will hurt you and steer you in the wrong direction. There are many forces and different directions that can help or interfere with the harmony of nature and also with the Great Spirit and all of his wonderful teachings. All while the spider spoke, he continued to weave his web … starting from the outside and working toward the center. When Iktomi finished speaking, he gave the Lakota elder the web and said, ´See, the web is a perfect circle, but there is a hole in the center of the circle. Use the web to help yourself and your people … to reach your goals and make use of your people’s ideas, dreams and visions. If you believe in the Great Spirit, the web will catch your good ideas, and the bad ones will go through the hole.´” 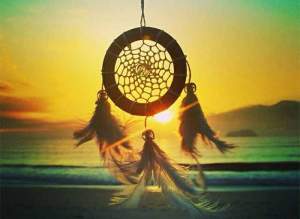 The Lakota tribe believes that  the Great Wisdom has been symbolized with the majestic spider that teaches people to choose between good and bad dreams and to direct their dreams into the positive events. The dreamcatcher has been supposed to let good dreams and visions to come to the individuals and to stop bad and negative thoughts to affect them. The Ojibwe tribe has spoken about powerful Spider Woman that watches over all the members of the tribe and gives them instructions to stay on the light. Because of so many people, she could not have all protected so, based on the legend, she invented the dreamcatcher and put her spiritual strength into the energy of that first dreamcatcher.

For those Native American tribes, the spiders have a special meaning since they are linked to the holy creatures and the sacred messages they bring to the world of earth. Since then, the original dreamcatchers are always handmade and consist of a small wooden hoop covered in a web of natural fibers, with attached feathers. It is very important that the dreamcatchers have only natural elements without any touch of artificial so they can, at least that is what Native Americans tale brings, keep demonic temptations away and process forward the inspiring messages of good spirits. 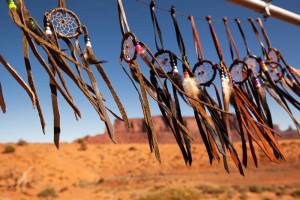 The beautiful talisman is not just a perfect decoration for our homes but the fetching reminder about the depth of Native American culture and beliefs. Each time we look at the dreamcatcher, we can feel the vibes of the Great Wisdom that comfort our inner beings. The dreamcatcher itself has been created to follow the shape of the Native American soul. This means that the original dreamcatcher is actually so made to connect all significant issues in the tradition of Native American tribes. It is in the form of circle since the whole life is one full circle, beginning and end, alpha and omega. The net symbolizes the spider´s devoted work and the sacred messages it shares with us, with the purpose to protect us. Unfortunately, the dreamcatcher as the unique talisman of American Indians has been transformed into the popular totem and simply digested in the commercial machine as a cool holy thing, ready to be mass-produced and sold. It was like some kind of revitalization of Native spirituality under the pressure of New Age model of life. Americans have seen the dreamcatcher as the sign of their open mind for the soul and heart of Native Americans while Native Americans have never really welcomed the American plastic and financial misuse of spirituality. It was always a little bit of discomfort between Native American culture and modern American culture. The both try to bring the soul joy but the roads are different and that is why the secularism has condemned the American Indian spiritualism while the official religions have no understanding for an ancient worship. In the meantime, the tiny dreamcatcher has been exposed as the last chance for the human kind to escape the traps of the evil forces and to rise above the darkness. The positive outcome of the commercial aggression and appetite for profit is the expansion and the accepting of the unknown. The New Age adopted dreamcatcher as the mascot of merged cultures but people have never really understood that we have to embrace the hope and to deny the despair as long as we have our souls and ourselves.

The old and enlightened Native Americans have learnt how to recognize the light and to catch the good dreams and they have not been selfish to keep that wisdom only for themselves. They have shared it with us and let us experience the strength of an ancient prudence.

3 thoughts on “THE DREAM CATCHER: AMERICAN INDIANS AND ALL THEIR SECRET TALISMANS”

THE SACRED CAT OF BIRMA: THE CATS OF TEMPLE

THE DAY BEFORE OUR LAST STAND: THE AUTHENTICITY OF PLANET OF APES