The modern civilization  is still facing with the barbaric traditions all over the world. Sometimes, it is not only about the primitive level but about the cruel and horrific rituals which are totally opposite to the  human aspirations of the mankind.

Global village is not anymore reserved for rich population but for everyone who is able to be the part of the international fluctuations and changes. The cultures and religions are merged into one big collage  but the consequences of that melting pot are different. There are still those communities and ceremonies which are holding on resistance to the high-tech trend and highlights of the advanced societies. We can call them barbaric and backward but they do not give up on their religious or traditional practice, making us shocked and sometimes ashamed sharing the title homo sapiens with them.

There are lot of controversial rites in every continent, almost in every single country, no matter how much it is developed or not. Majority of them are weird but some of them are bloody and terrific, like a trailer for cheap  Hollywood  horror movie. Pain. Terror. Death. Reminder that we are nothing but beasts with possibility to communicate and to eliminate other living beings only if we want that and when we want that. Bestiality. Men and their rules.

The Dog Meat Festival is something typical for Asian part of the world. Back in past, when I was informed that some countries like China, South Korea, Vietnam, Philippines and Cambodia  are into dog meat trade, I was mentally paralyzed even  to  think  how much our best friends, dogs,  suffer in these societies. It should be some kind of contract, something we own to dogs, at least that we will not eat them. But, at the end of the day, human beings are eating everything and anything and it would be hypocritical to attack them for eating dogs while we are eating cows, chickens and all other animals we are able to catch. Maybe it is just about the preferences, but I do believe that consummation of the  dog meat is not only retrograde in cultural and spiritual way but also negative in medical way. The epidemic information state that dog meat in the targeted lands is dangerous and mostly infectious.

Unfortunately, the legendary hell for dogs, named as Yulin Dog Meat Festival in China and Boknal in South Korea, do not care about the sanitary recommendations and there are people over there who enjoy in eating dog meat and believing that it helps them. This shameful tradition is not only Asian whilst Africa is participating in this too. West Africa has its own Yulin and Boknal, known as Evala Dog Meat Eating Festival.

What is Evala ? The hot African summer has already had its annual Evala Festival.It is always in the last week of June and it takes one week  for thousands of African boys and young men to go into isolation and to consume dog meat. After one week, they are coming into public competitions and local tribe sport manifestation “Evala” in Togo  and keep eating dog meat. They believe that dog meat gives them strength and full body capacity:“As well as gorging on dog meat, prior to entering the arena a dog is killed and the fat is rubbed onto the body of the fighter to make his him slippery, so his opponent cannot seize him.The two week annual ritual is performed by each man, over three years. As the Evala wrestling practice spreads across more locations, so does the mass number of brutal slaughtering of dogs for dog meat, seen as the wrestler’s secret weapon for success.Each competitor desires the attributes which dogs posses: loyalty, courage, intelligence, endurance, cunning, faithfulness and so on. It is falsely believed eating dog meat will transfer the dog’s attributes to the consumer, giving the consumer supernatural powers over their opponent.” 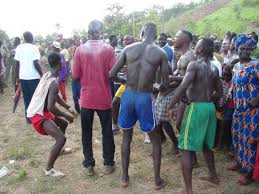 The importance of the Evala Festival is big for each member. That is some kind of initiation process and if any of young Kabye men refuse to contribute and to take role in this, he will pay the price of being condemned by family and community.

Togo is not only famous for Evala horror. Behind the many controversial ceremonies which take place in Togo, there are some what are known as the result of black magic celebrations. It doesn’t surprise at all the fact that the voodoo market is the world’s biggest here as well as the complete black magic equipment. For rituals which are performed in the name of undefined spells, Togo shamans sacrifice animals and Togo traders deal with animal parts, selling them for further healing or grudges. The complete amount of sacrificed animals like dogs, goats, sheep or birds is unknown but what is known is the bad health situation over there. The absence of medical checking of meat, especially dog meat, opens the gate for infectious diseases. The biggest problem is with rabies, which became almost the endemic disease across the African area. The people who are infected by Rabies do not consult doctors but rather local shamans who offer them cure based on bizarre ideas:”Togolese people falsely believe rabies can be cured by grinding up a dog’s head and placing it in the wound.” That is not only cultural  but also social and  epidemic regressive. The consummation of dog meat for purpose which are more mythological than scientific proves that some cultures and communities live in magic bubble for decades.

The solution is not to condemn these people or to spread negativity about their ceremonies. The solution is to work on the ground through the education and spreading the reality about the health and influence of this practice on the health in the long term. Those people will never change this ritual unless they are informed continually why this is wrong and how it could be turned into something which combines sport spirit and  good health conditions.

In the meantime, all we can do is to urge with petitions to stop this barbaric, bloody festival or at least to replace it with something which is not devastating.

We can see the soul of the society through its relation with animals.The highest compassion means the highest humanity, stable development and happy people who know that they do not need to eat their best friends for God’s mercy.